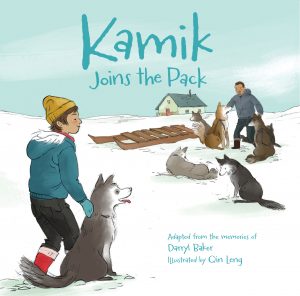 Kamik Joins the Pack was in my mail today. Adapted from the memories of Darryl Baker, who is Inuit, the story is the third in Inhabit Media’s series featuring Jake and his pup, Kamik.

I first met Kamik in 2013, in Kamik: An Inuit Puppy Story. Jake had just gotten him. Course, Kamik has all the bountiful energy of a puppy—and Jake has all the frustration of a little boy trying to teach him this or that. Jake’s grandpa helps him out, giving him perspective, and stories, too, about the importance of sled dogs. Then in 2015, Kamik’s First Sled came out. In it, Jake wants Kamik to learn how to pull a sled. His grandma helps him. Continue reading.

Publisher's synopsis: Jake can't wait for his uncle to meet Kamik, and to see what an obedient puppy he is becoming. Jake's uncle is a great musher, who has won many dog sledding races, and if Kamik is good enough, Jake hopes today might be the day that Kamik finally gets to run with a dog team! Following Kamik: An Inuit Puppy Story and Kamik's First Sled, Kamik Joins the Pack continues the story of Jake and his puppy Kamik as they learn from their elders everything they need to know to some day be part of a winning sled dog team.