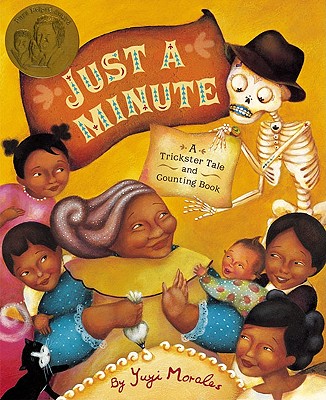 With his sugar-skull face and Día-de-los-Muertos outfit consisting of a bowler hat, wristwatch, and braces to hold his teeth in, Señor Calavera is polite yet insistent. It’s time, he says, for Grandma Beetle to come along with him. Pues, Señor Calavera will soon to find out that Grandma Beetle has other plans — she’s staying around for awhile, and Mr. Death will just have to wait — “just a minute.”

From the first double-page spread — in which a grinning Señor Calavera tips his hat to the left and Grandma Beetle, with a bemused expression on her face, nods to the right — young readers, especially Mexican and Mexican American children, will guess that something hilarious is about to happen. The scene is set: Señor Calavera’s not hiding who he is, and Grandma Beetle has no intention of going with him. The only one who seems frightened is a little black-and-white kitten, who runs away — or hides, or tries to appear large — on every spread.

Publisher's Synopsis: This original trickster tale, with its vivacious illustrations and dynamic read-aloud text, is at once a spirited tribute to the rich traditions of Mexican culture and a perfect introduction to counting in both English and Spanish.