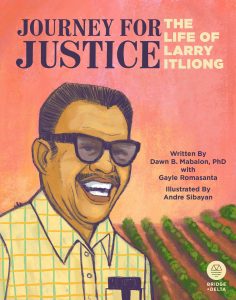 It is well known that children’s literature has a powerful ability to provide impactful and long-lasting lessons on its target audience. They can make our youth smile, laugh and feel empathy for the people whose tales are told within. Yet, we rarely see juvenile literature also be biographies of historical figures. And when we do, we don’t typically see representation of people whose complex story of hardship and leadership is packaged into an understandable way for its target audience.

Dawn Bohulano Mabalon, Gayle Romasanta and Andre Sibayan’s Journey for Justice: The Life of Larry Itliong is one notable exception. Their book tells the story of labor organizer Larry Itliong, an incredibly important figure in Filipino American history, highlighting his struggles and triumphs to a generation born decades after his time but continue to be impacted by his work to this day. Continue reading.

Why Every Filipino American Should Know about Larry Itliong

. . .Larry Itliong immigrated to the United States in 1929 when he was fifteen years old and immediately began working throughout the country as a farm laborer and in the salmon canneries of Alaska. His heart was set on becoming an attorney and seeking justice for the poor. But the poverty he lived through and violent racism he and Filipinos encountered all but barred him from getting the education he initially sought. He never became an attorney, but he became a storied Filipino American labor leader and organizer, leading labor organizations in Alaska and throughout the West Coast.

He called Stockton his hometown while he recruited more than a thousand new members to join the Agricultural Workers Organizing Committee (AWOC). He was so good at what he did, union leaders asked him to leave for Delano to organize Filipino grape workers. It was there in Delano, a small town four hours outside of Stockton, that he led the Filipino grape workers at Filipino Hall to vote to go on strike on September 7, 1965. The next day, the Delano Grape Strike began, and more than 2,000 Filipino farmworkers, members of AWOC, marched off the vineyards to demand $1.40 an hour, 25 cents a box, and the right to form a union. The farmworkers had a lot on the line. If they went on strike, they wouldn’t get paid. Continue reading.

Publisher's Synopsis: This book, written by historian Dawn Bohulano Mabalon with writer Gayle Romasanta, richly illustrated by Andre Sibayan, tells the story of Larry Itliong's lifelong fight for a farmworkers union, and the birth of one of the most significant American social movements of all time, the farmworker's struggle, and its most enduring union, the United Farm Workers.