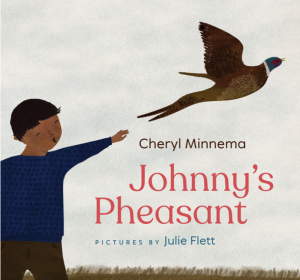 Johnny’s Pheasant is written by Cheryl Minnema (Mille Lacs Band of Ojibwe) and illustrated by Julie Flett (Cree-Métis). New in 2019, it is a picture book I am pleased to recommend.

Grandma’s are special, aren’t they? Mine was, and I know my mom is special to my daughter and all her other grandchildren. In some families, grandma’s make things. When I was a kid, I hung out with my grandma, a lot. I have such fond memories of those times, helping and watching her make things.

Back in the 1960s when the US government was putting a blacktop road on our reservation, they also strung barbed wire fencing to keep livestock off the road. That barbed wire came on wire spools that are about the size of a 5 gallon bucket. The end parts of the spool looked like flower petals. Here’s a photo that sort of looks like what I have in my memory: 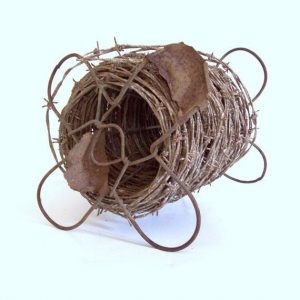 I walked with my grandmother for miles and miles, gathering up empty, cast off spools. At home, she bound them together in an array that she attached to a wood frame. These then became charming gates to the porch, and to the garden. She also worked with feathers. She especially liked peacock feathers. She’d trim them and attach them to fabric wall hangings. They were so pretty!

In Johnny’s Pheasant, we see a grandma and grandson, out and about. Johnny spies something in the grass. Turns out, it is a pheasant! Grandma thinks it is dead and that she can use its feathers in her craft work. But Johnny thinks the pheasant is ok. He’s right! Continue reading.

Publisher's Synopsis: An encounter with a pheasant (which may or may not be sleeping) takes a surprising turn in this sweetly serious and funny story of a Native American boy and his grandma.

"Pull over, Grandma! Hurry!" Johnny says. Grandma does, and Johnny runs to show her what he spotted near the ditch: a sleeping pheasant. What Grandma sees is a small, feathery hump. When Johnny wants to take it home, Grandma tries to tell him that the pheasant might have been hit by a car. But maybe she could use the feathers for her craftwork? So home with Grandma and Johnny the pheasant goes . . . .

It's hard to say who is most surprised by what happens next — Grandma, Johnny, or the pheasant. But no one will be more delighted than the reader at this lesson about patience and kindness and respect for nature, imparted by Grandma's gentle humor, Johnny's happy hooting, and all the quiet wisdom found in Cheryl Minnema's stories of Native life and Julie Flett's remarkably evocative and beautiful illustrations.