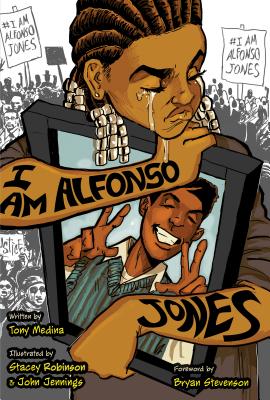 I Am Alfonso Jones provides young readers with a narrative that not only addresses the complexity and history of police brutality but also discusses climate change, gun control, the criminalization of Black males, the Black Lives Matter movement, youth activism, Afro Latinidad, and so much more.

Alfonso, a New York City teenager, attends the prestigious Henry Dumas School of the Arts, a school for gifted youth. While shopping for a suit with his friend Denetta, a police officer who mistakes a hanger for a weapon, shoots Alfonso. Joined by a train of ancestors also killed through police violence, Alfonso goes on a journey that illuminates the circumstances of his death and the devastating impact his murder had on his friends and family.

Written as a graphic novel, I Am Alfonso Jones can grasp the attention of middle school and high school students alike. Tony Medina’s use of New York slang will empower urban youth to see themselves as intellectuals capable of having academic conversations using their own dialect to discuss literature.

Alfonso Jones can't wait to play the role of Hamlet in his school's hip-hop rendition of the classic Shakespearean play. He also wants to let his best friend, Danetta, know how he really feels about her. But as he is buying his first suit, an off-duty police officer mistakes a clothes hanger for a gun, and he shoots Alfonso.

When Alfonso wakes up in the afterlife, he's on a ghost train guided by well-known victims of police shootings, who teach him what he needs to know about this subterranean spiritual world. Meanwhile, Alfonso's family and friends struggle with their grief and seek justice for Alfonso in the streets. As they confront their new realities, both Alfonso and those he loves realize the work that lies ahead in the fight for justice.

In the first graphic novel for young readers to focus on police brutality and the Black Lives Matter movement, as in Hamlet, the dead shall speak--and the living yield even more surprises.