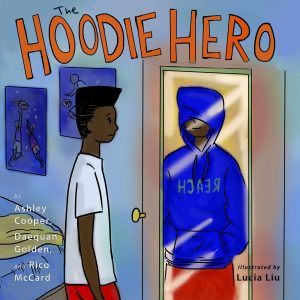 The Hoodie Hero by Washington, D.C. high school students Ashley Cooper, Daequan Golden, and Rico McCard tells an inspirational story of confronting a bully that is chock-a-block with valuable lessons.

The story opens with the protagonist, Da’Monte, playing basketball at school. The reader is quickly introduced Marco, who the writers characterize as a classic school bully, highlighting a number of key themes and trends, such as Marco’s insecurity and his tendency to pick on vulnerable kids, among other things. Da’Monte is faced with an opportunity to intervene when one of his friends is picked on by Marco, but he chooses not to out of his own fear.

In the end, the roles are reversed; Da’Monte has helped give his peers confidence to stand up to Marco, and in turn Marco becomes a victim, as he is shamed and laughed at by the students at school. This prompts important dialogue to follow the story about what it means to forgive and embrace others.

The Hoodie Hero preaches the importance of confidence in one’s unique style, and the ability to stand up for one’s self and others. Unlike other hero stories, which may be more unrealistic, The Hoodie Hero sets a bar for hero status that feels achievable to young readers by the end of the book.