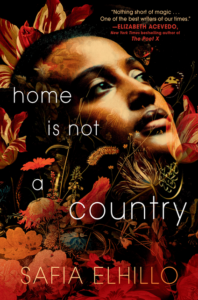 This book, a novel in free verse and written for young adult readers, is a story that delights in countless ways. Written by the young Sudanese American writer and poet Safia Elhillo, it tells the story of a teenage, Muslim, first-generation immigrant girl, called Nima — in Arabic written and pronounced Niʿma, with the guttural consonant ʿayn in the middle. Nima’s parents’ country of birth is not mentioned by name, but the cultural references — dances (such as the raqaba), songs (from Sudan and Egypt), and dress (women’s colorful chiffon tobes) all point to Sudan. Nima feels inadequate, awkward, and unloved in her U.S.  environment and imagines a spirit double, called Yasmeen, the name her absent father had chosen for her before she was born. Nima imagines Yasmeen as the girl still living in their homeland, whose Arabic was perfect, who was prettier and more graceful — in short, a better and more lovable version of Nima herself. Continue reading.

Home Is Not a Country by Safia Elhillo
Published by Make Me A World on 2021
Genres: Africa, Immigration and Emigration
Pages: 224
Reading Level: High School
ISBN: 9780593177051
Review Source: Africa Access

From the acclaimed poet featured on Forbes Africa's "30 Under 30" list, this powerful novel-in-verse captures one girl, caught between cultures, on an unexpected journey to face the ephemeral girl she might have been. Woven through with moments of lyrical beauty, this is a tender meditation on family, belonging, and home.

My mother meant to name me for her favorite flowerits sweetness garlands made for pretty girlsi imagine her yasmeen bright & alive& i ache to have been born her insteadNima wishes she were someone else. She doesn't feel understood by her mother, who grew up in a different land. She doesn't feel accepted in her suburban town; yet somehow, she isn't different enough to belong elsewhere. Her best friend, Haitham, is the only person with whom she can truly be herself. Until she can't, and suddenly her only refuge is gone.

As the ground is pulled out from under her, Nima must grapple with the phantom of a life not chosen — the name her parents meant to give her at birth — Yasmeen. But that other name, that other girl, might be more real than Nima knows. And the life Nima wishes were someone else's. . . is one she will need to fight for with a fierceness she never knew she possessed.