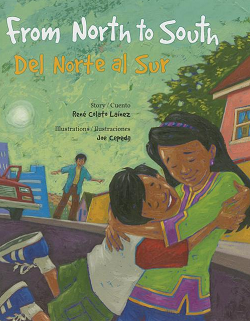 Hot off the press, From North to South/Del norte al sur addresses issues of family separation and deportation head-on. The story is told from the perspective of José, a young child who travels from San Diego to Tijuana to see his mother, recently deported in a factory raid. At the shelter where she is staying, José meets other women and children who have also been separated from their families. It is clear how deeply his mother’s deportation affects José — and this is movingly described — but there are several reasons that his situation should not be considered broadly representative. His father is a permanent resident of the United States and can hire a lawyer for his mother, and José lives close enough to the border to visit her every weekend. His mother has been able to find lodging at a safe and welcoming shelter, and every indication is that she will soon be able to return home. Neither the other women and children in this book, nor our own students who face similar challenges, are guaranteed these advantages and resources. Thus there is much here for teachers to discuss with their students — especially the complex reasons behind José’s family’s separation and the different ways that families experience deportation.

The story ends with a description of José’s dream as he sleeps on the car ride back to San Diego: mamá has the right papers, the family crosses the border together, fireworks fill the sky, and José knows “that all the other children would see their parents soon, too.” This is a beautiful dream, but it is indeed a dream. The real world does not deliver fairytale endings so reliably, and the other children at the shelter may not soon be reunited with their families. In this respect, the book seems torn between the attempt to realistically portray the pain caused to children by deportation and the desire to provide a happy ending. In choosing the latter, it may set students up with the unrealistic expectation that deportation is always temporary, and those who face it will inevitably be reunited with their families in the United States.

Despite these issues, From North to South/Del norte al sur remains one of the only children’s books that directly portrays a child’s struggle with family separation caused by deportation, and so is an invaluable addition to any classroom. 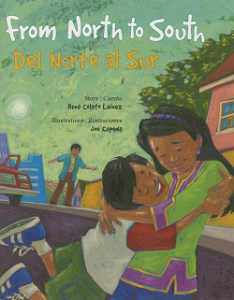 Publisher's Synopsis: Near the border, the cars began to move very slowly. “Papá, go fast. I want to see Mamá,” I said.

José loves helping Mamá in the garden outside their home in California. But when Mamá is sent back to Mexico for not having proper papers, José and his Papá face an uncertain future. What will it be like to visit Mamá in Tijuana? When will Mamá be able to come home?

Award-winning children’s book author René Colato Laínez tackles the difficult and timely subject of family separation with exquisite tenderness. René is donating a portion of his royalties to El Centro Madre Assunta, a refuge for women and children who are waiting to be reunited with their families up north. Joe Cepeda’s bright and engaging illustrations bring this story of hope to vivid life.