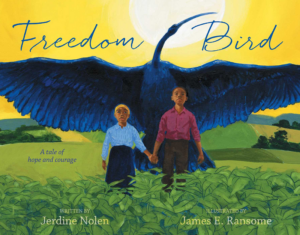 Following in the tradition of oral storytelling, Freedom Bird is a blend of history and folklore. Reminiscent of Roots, but targeted for children and inspired by The People Could Fly, Nolen tells the multigenerational story of the Wheeler family on Simon Plenty’s fictional plantation. The narrative is grounded in the idea that our lives are shaped on account of those who have come before us and, therefore, our patterns will shape the lives of those yet to come. When brother and sister, John and Millicent Wheeler, escape the Plenty plantation with the guidance of a grand black bird whom they nursed back to health after the plantation overseer struck it out of the sky, they figuratively fly to liberation on the back of the freedom bird for themselves and generations to follow.

Loaded with symbolism and paying homage to nonfiction escape narratives, Freedom Bird is set apart by the children escaping west instead of north via the Underground Railroad. Nolan writes, “But now a way was made west, where the world was waiting wide open and free,” (p. 2) with accompanying illustrations that show a vast, green space ready for habitation.

The inaccuracy of the West being a “free” space takes away from the empowering story and, in fact, further erases another marginalized group of people. There is no acknowledgement of the Indigenous peoples who lived in the West and were stripped of their home and rights. This joint message of exploitation and injustice on behalf of both Indigenous peoples and enslaved Africans was a missed opportunity.

While this lyrical book for upper elementary readers effectively engages themes on slavery and resistance, the erasure of Indigenous peoples in the west is problematic.

In this inspiring story in the tradition of American black folktales, an enslaved brother and sister are inspired by a majestic and mysterious bird to escape to freedom in this dramatic and unforgettable picture book.

There was nothing civil about that war. They should have called it what it was: a big, bad war.

Brother and sister Millicent and John are slaves on Simon Plenty’s plantation and have suffered one hurt and heartbreak after another. Their parents had told them old tales of how their ancestors had flown away to freedom just as free and easy as a bird. Millicent and John hold these stories in their hearts long after their parents are gone. “Maybe such a time will come for you,” their parents said. Then one day a mysterious bird appears in their lives. The bird transforms them and gives them the courage to set their plan into motion and escape to freedom.