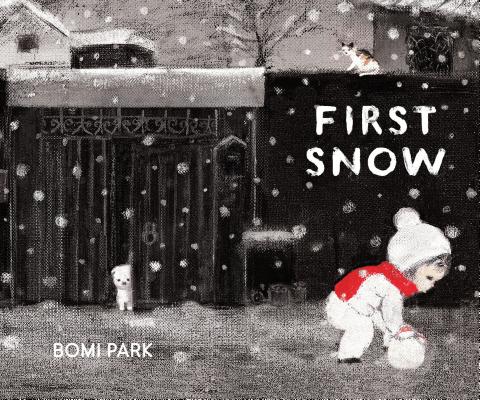 First published in South Korea in 2012, Bomi Park’s debut is a dreamlike picture book that celebrates the wonder of the natural world.

When an unnamed small girl awakens to the first snowfall of the season, she puts on her boots, coat, scarf and hat and heads outside. Never mind that the sky is still pitch black. That’s all part of the sense of wonder we get from the pictures, shown in black, white and shades of gray. The only color initially is the red scarf the little girl wears around her neck, and the red stripe across her knitted mittens. The textured paintings are quiet and subtle and striking. Continue reading.

SYNOPSIS: Look out. Now look up. From the sky one flake falls, then another. And just like that—it's snowing.
In this beautiful book from debut creator Bomi Park, a young girl wakes up to the year's first snowy day. From her initial glimpse out the window to her poignant adventures—rolling a snowman, making snow angels—the girl's quiet quests are ones all young readers will recognize. Simple, muted text and exquisite, evocative art conjure the excitement of a day spent exploring the wonder of snow—and the magic that, sometimes literally, such a day brings. As subtly joyful as a snow day itself, this book will find its home in the hearts of young adventurers everywhere.