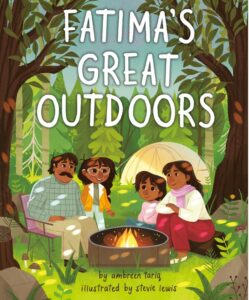 Fatima is having a hard time adjusting to her new life in the United States and is looking forward to camping, what her Papa calls “a great American pastime,” (p. 2) as a means of escaping from the bullying and isolation she experiences in her all-white class. At the campgrounds, Fatima questions why her family always has to be so different when they can’t build a campfire as easily as other campers (all white, as well) to make halal bacon for breakfast, “just like the other American families” (p. 23). For all the happiness Fatima feels over belting out Bollywood songs during the family’s road trip, eating Mama’s shami kababs and rotis in the woods, and reminiscing over funny stories from India around the campfire, her burning desire to be just like the other American families never seems to be fully extinguished.

I was expecting Fatima to embrace her family’s cultural differences by the end of the book, which she might have somewhat, but it’s not really clear. She noticed that being outdoors reminded her of the happiness she felt back in India and shared her experiences with a smiling class on Monday at show and tell, but her feelings of displacement remain unresolved as she never vocalizes them.

While this narrative makes an important call to action for brown people to carve out a space for themselves in nature in a spirit of reclamation, other themes such as the displacement and ostracization experienced by immigrants are less nuanced.

Some other concerns I had, such as the abundance of South Asian American clichés, were articulated well in a review by Hijabi Librarians, and the surplus of themes taking away from the specific cultural nuggets offered was also mentioned in a review by the Islamic School Librarian.

Publisher Synopsis: An immigrant family embarks on their first camping trip in the Midwest in this lively picture book by Ambreen Tariq, outdoors activist and founder of @BrownPeopleCamping

Fatima Khazi is excited for the weekend. Her family is headed to a local state park for their first camping trip! The school week might not have gone as planned, but outdoors, Fatima can achieve anything. She sets up a tent with her father, builds a fire with her mother, and survives an eight-legged mutant spider (a daddy longlegs with an impressive shadow) with her sister. At the end of an adventurous day, the family snuggles inside one big tent, serenaded by the sounds of the forest. The thought of leaving the magic of the outdoors tugs at Fatima's heart, but her sister reminds her that they can keep the memory alive through stories — and they can always daydream about what their next camping trip will look like.

Ambreen Tariq's picture book debut, with cheerful illustrations by Stevie Lewis, is a rollicking family adventure, a love letter to the outdoors, and a reminder that public land belongs to all of us.