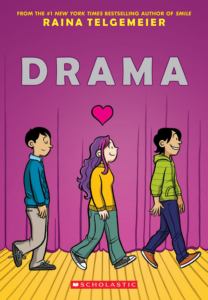 “Springtime in the South is Like a Song in My Heart”: Raina Telgemeier’s Drama, the Romanticization of the Plantation South, and the Romance Plot

Abstract
This essay explores the complex relationship that exists between the romance plot and the romanticization of the antebellum South in Raina Telgemeier’s critically acclaimed and commercially successful graphic novel, Drama. The text’s use of a Gone With the Wind-style musical as its romantic and thematic pivot point complicates its political message and calls into question its seemingly progressive stance on social issues. While critics have praised Telgemeier’s text for its racially and ethnically diverse cast of characters, the moonlight-and-magnolias musical that forms the centerpiece to Drama traffics not simply in a historical myth, but in a white-centric fantasy. In so doing, the graphic novel demonstrates the limitations of LGBTQ youth advocacy that does not remain cognizant of intersectionality, while it also highlights the problem with millennial forms of liberal multiculturalism that omit critical discussions about race. Continue reading.

Michelle Ann Abate is professor of Literature for Children and Young Adults at Ohio State University.

Publisher's Synopsis: Callie loves theater. And while she would totally try out for her middle school's production of Moon over Mississippi, she can't really sing. Instead she's the set designer for the drama department's stage crew, and this year she's determined to create a set worthy of Broadway on a middle-school budget. But how can she, when she doesn't know much about carpentry, ticket sales are down, and the crew members are having trouble working together? Not to mention the onstage AND offstage drama that occurs once the actors are chosen. And when two cute brothers enter the picture, things get even crazier!