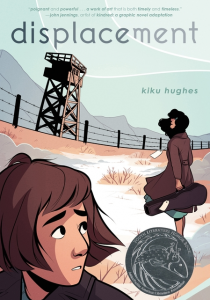 This book provides an invaluable perspective for younger generations on how the injustices faced decades ago are still applicable to today’s world. As a descendant of Japanese Americans who were forced into these internment camps, I had heard stories and seen pictures of what life was like there. However, I didn’t fully grasp the extent of the prejudices and trials that were daily faced and relate very much to Kiku in that aspect of how little she really knew about the camps.

This book inspired me to not only further explore my family’s history, but to also fight against the injustices of today’s world, so that others don’t have to suffer like my family had to. The fact that this story takes place in present day and highlights issues that are being faced today, makes this story even more relevant and necessary for everyone to read. Continue reading.

Publisher's Synopsis: A teenager is pulled back in time to witness her grandmother's experiences in World War II-era Japanese internment camps in Displacement, a historical graphic novel from Kiku Hughes.

Kiku is on vacation in San Francisco when suddenly she finds herself displaced to the 1940s Japanese-American internment camp that her late grandmother, Ernestina, was forcibly relocated to during World War II.

These displacements keep occurring until Kiku finds herself "stuck" back in time. Living alongside her young grandmother and other Japanese-American citizens in internment camps, Kiku gets the education she never received in history class. She witnesses the lives of Japanese-Americans who were denied their civil liberties and suffered greatly, but managed to cultivate community and commit acts of resistance in order to survive.

Kiku Hughes weaves a riveting, bittersweet tale that highlights the intergenerational impact and power of memory.