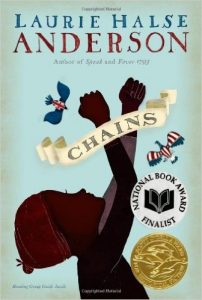 “‘Freedom and liberty’ has many meanings,” but enslaved Isabel knows that while Loyalists and Patriots battle for their own versions of freedom, she is “chained between two nations” that uphold slavery. She wonders, “If an entire nation could seek its freedom, why not a girl?” Anderson brilliantly recreates New York City in the summer of 1776, viewed through the eyes of a remarkable heroine. Taught to read by her previous owner, Isabel knows the Bible and has memorized poetry, and her eloquent first-person voice portrays her life as a slave even as she spies for the rebels, covertly delivers food to Bridewell Prison and plots her own escape. Readers will care deeply about Isabel and may feel frustrated by the abrupt ending to the novel, clearly poised for a sequel or two. [Two sequels are now in print, Forge and Ashes.] While waiting, they can enjoy M.T. Anderson’s The Astonishing Life of Octavian Nothing, Traitor to the Nation: Volume II, The Kingdom on the Waves, another superb take on the subject.

Publisher's synopsis: If an entire nation could seek its freedom, why not a girl? As the Revolutionary War begins, thirteen-year-old Isabel wages her own fight...for freedom. Promised freedom upon the death of their owner, she and her sister, Ruth, in a cruel twist of fate become the property of a malicious New York City couple, the Locktons, who have no sympathy for the American Revolution and even less for Ruth and Isabel. When Isabel meets Curzon, a slave with ties to the Patriots, he encourages her to spy on her owners, who know details of British plans for invasion. She is reluctant at first, but when the unthinkable happens to Ruth, Isabel realizes her loyalty is available to the bidder who can provide her with freedom.
From acclaimed author Laurie Halse Anderson comes this compelling, impeccably researched novel that shows the lengths we can go to cast off our chains, both physical and spiritual.