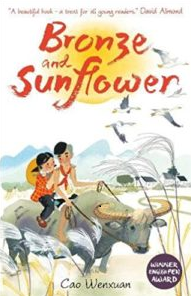 Seven-year-old Sunflower is the daughter of an artist forcibly relocated from the city to the countryside during China’s cultural revolution. By day, he works in the “Cadre School,” leaving the young child to explore the river and nearby village of Damaidi. There she sees a slightly older boy riding a water buffalo. The boy, called Bronze, has been mute ever since a fire ravaged the family’s home. After her father drowns in a freak storm, the other members of the Cadre School bring little Sunflower to the village and Bronze’s family—the poorest family there—are the ones who choose to adopt her. Over the next six years, the family sacrifices to send Sunflower to school and survives a variety of disasters that befall poor rural villages during this period. Throughout, friendship and love sustain the two children and those around them, and Sunflower becomes a valued and beloved member of her new community.

Cao Wenxuan, one of China’s most popular authors for children, offers an endearing and inspiring retrospective on one of China’s cruelest periods—a time when Communist Party leader Mao Zedong ordered intellectuals out of the city to toil on farms, believing knowledge and discourse to be corrupt, reactionary, and dangerous to the Revolution. Continue reading.

Sunflower is an only child, and when her father is sent to the rural Cadre School, she has to go with him. Her father is an established artist from the city and finds his new life of physical labor and endless meetings exhausting. Sunflower is lonely and longs to play with the local children in the village across the river. When her father tragically drowns, Sunflower is taken in by the poorest family in the village, a family with a son named Bronze. Until Sunflower joins his family, Bronze was an only child, too, and hasn't spoken a word since he was traumatized by a terrible fire. Bronze and Sunflower become inseparable, understanding each other as only the closest friends can. Translated from Mandarin, the story meanders gracefully through the challenges that face the family, creating a timeless story of the trials of poverty and the power of love and loyalty to overcome hardship.