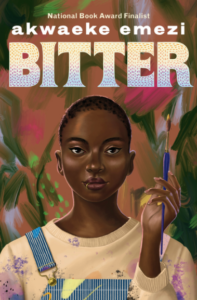 In Pet, Akwaeke Emezi’s 2019 young adult debut, we followed Jam and Redemption as they hunted down an all-too-human monster with the titular creature, an angel from another dimension. Two years later Emezi has bestowed upon the world the follow-up, a prequel about Jam’s eventual parents, Bitter and Aloe, and the brutal world they hoped to spare their future child from.

Lucille is terrorized by police brutality and anti-Black racism. Assata, a group of Black activists, are marching seemingly every day in defiance of their oppression. Meanwhile, behind the gates of the exclusive art academy Eucalyptus, Bitter hides in her craft. Ever since she was little, she’s been able to bring her artwork to life with a little blood and a whole lotta will. As the police crackdowns get worse and her friends suffer the brunt of it, Bitter is pushed from the sidelines to the frontlines. An act of passionate and furious creation brings forth monstrous creatures not unlike Pet, angels bent on total destruction. Continue reading.

From National Book Award finalist Akwaeke Emezi comes a companion novel to the critically acclaimed PET that explores both the importance and cost of social revolution — and how youth lead the way.

After a childhood in foster care, Bitter is thrilled to have been chosen to attend Eucalyptus, a special school where she can focus on her painting surrounded by other creative teens. But outside this haven, the streets are filled with protests against the deep injustices that grip the city of Lucille.

Bitter’s instinct is to stay safe within the walls of Eucalyptus . . . but her friends aren’t willing to settle for a world that’s so far away from what they deserve. Pulled between old friendships, her artistic passion, and a new romance, Bitter isn’t sure where she belongs — in the studio or in the streets. And if she does find a way to help the revolution while being true to who she is, she must also ask: at what cost?

This timely and riveting novel—a companion to the National Book Award finalist Pet—explores the power of youth, protest, and art.