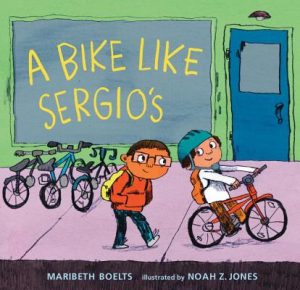 “Every kid has a bike but me,” says our sorrowful young narrator, who longingly watches his friends having the fun he is denied. Ruben especially dreams of having a bike just like that of his oblivious friend, Sergio, who rides his new one while Ruben breathlessly runs alongside. But since he’s poor, he says, “I know that wishes won’t make money appear.” At the grocery store, while Sergio purchases a pack of football cards, Ruben buys only the loaf of bread his mom wants.

When he sees that the woman in a blue coat ahead of him in line has dropped what he thinks is “just” a $1 bill, he pockets it, and when he gets home, Ruben discovers that it’s really a $100 bill. He dreams of finally being able to purchase a bike, but there’s a decision he must make. This moral and ethical dilemma takes up most of the story. When Ruben thinks that he may have lost the $100 bill, he retraces his steps “from school to bike shop to home.” It’s raining, and “rain and tears feel the same.” This defining moment before he recovers the money lends him a measure of empathy, and finally, young Ruben decides to return the money to the woman who had dropped it. But still, he doubts his choice: “I am happy and mixed up, full and empty, with what’s right and what’s gone.” Ruben is poor, then rich, then poor again.

This narrative, for all young readers to digest, implies that Ruben and other children in his low-income community are instinctively drawn to thievery in order to gain material objects. Continue reading.

Publisher's Synopsis: Finders keepers, right? When Ruben picks up someone's lost money, he finds out how hard it can be to do the right thing.

Ruben feels like he is the only kid without a bike. His friend Sergio reminds him that his birthday is coming, but Ruben knows that the kinds of birthday gifts he and Sergio receive are not the same. After all, when Ruben's mom sends him to Sonny's corner store for groceries, sometimes she doesn't have enough money for everything on the list. So when Ruben sees a dollar bill fall out of someone's purse, he picks it up and puts it in his pocket. But when he gets home, he discovers it's not one dollar or even five or ten--it's a hundred-dollar bill, more than enough for a new bike just like Sergio's! But what about the crossed-off groceries? And what about the woman who lost her money? Presenting a relatable story told with subtlety and heart, the creative team behind Those Shoes pairs up again for a satisfying new picture book.