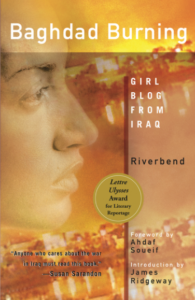 “The trouble with world history is it started so long ago,” I complained to anyone who would listen as I wrestled with the best way to start the year for my 10th-grade World History students. In their first journal entries, many of my students had already told me they thought history was “boring.” I wanted them to see history as something alive that really mattered, filled with the stories of interesting, everyday people. How could I generate some enthusiasm for the past?

At the same time, I was worried about how to integrate curriculum about the war in Iraq. During the lead-up to the U.S. invasion, the topic came up naturally in class. But now students seldom raised it and were often resistant when I brought it up. “We’re burned out on Iraq,” they told me. How could I teach world history and not explore the current events that were sure to have an enormous impact, both on my students’ lives and on the world’s future? I knew I didn’t want to relegate today’s news to a few weeks in June, but I hadn’t had much success with such formulaic approaches as current events days or weekly news assignments.

At just that point of confused frustration, I stumbled across an extraordinary resource: Baghdad Burning, Girl Blog from Iraq and Baghdad Burning II. The author, whose pseudonym is Riverbend, was a young computer programmer in Iraq when the war started. First trapped in her house by the bombings and fighting, then barred from working because of the deteriorating situation of women, she turned to blogging about her everyday life, events in Iraq, and the international situation. These first-person accounts are extraordinarily well-written and compelling (Baghdad Burning won the 2005 Lettre Ulysses Award for the Art of Literary Reportage). As an example, here’s an excerpt from one of her first blogs, Aug. 21, 2003:

My New Talent
Suffering from a bout of insomnia last night, I found myself in front of the television, channel-surfing. I was looking for the usual—an interesting interview with one of the council, some fresh news, a miracle. . . . Promptly at 2 a.m., the electricity went off and I was plunged into the pitch black hell better-known as “an August night with no electricity in Iraq.” So I sat there, in the dark, trying to remember where I had left the candle and matches. After 5 minutes of chagrined meditation, I decided I would ‘feel’ my way up the stairs and out onto the roof. Step by hesitant step, I stumbled out into the corridor and up the stairs, stubbing a toe on the last step (which wasn’t supposed to be there).

(For those of you who don’t know, people sleep up on the roof in some of the safer areas because when the electricity goes off, the houses get so hot, it feels like you are cooking gently inside of an oven. The roof isn’t much better, but at least there’s a semblance of wind.)

A few moments later, my younger brother (we’ll call him E.) joined me—disheveled, disgruntled, and half-asleep. We stood leaning on the low wall enclosing the roof watching the street below. I could see the tip of Abu Maan’s cigarette glowing in the yard next door. I pointed to it with the words, “Abu Maan can’t sleep either.” E. grunted with the words, “It’s probably Maan.” I stood staring at him like he was half-wild—or maybe talking in his sleep. Maan is only 13—how is he smoking? How can he be smoking?

I mulled the reality of this remark over. No, no one is 13 anymore. No one is 24 anymore. Everyone is 85 and I think I might be 105. I was too tired to speak and, in spite of his open eyes, I suspected E. was asleep. The silence was shattered a few moments later by the sound of bullets in the distance. It was just loud enough to get your attention, but too far away to be the source of any real anxiety. I tried to determine where they were coming from.

E: How far do you think that is?

Me: Not American bullets—

E (impressed): You’re getting good at this.

I keep wondering . . . will an airplane ever sound the same again?

Riverbend’s blogs fueled my determination to bring the U.S. war in Iraq into the classroom from the very start. We already had a pre-1500 project planned: a research-based poster on an empire or culture from 1000 to 1500 CE. The project serves as a review of the medieval world and an introduction to research skills, but its most important role is to explore the wealth of extraordinary and diverse cultures in the world before European colonial conquest began in the 1500s. I want to be sure that my students realize that the current division of the world into rich and poor countries, “developed” and “underdeveloped,” is a result of colonialism.  Continue reading.

Publisher's Synopsis: Since the fall of Bagdad, women's voices have been largely erased, but four months after Saddam Hussein's statue fell, a 24 year-old woman from Baghdad began blogging.

In 2003, a twenty-four-year-old woman from Baghdad began blogging about life in the city under the pseudonym Riverbend. Her passion, honesty, and wry idiomatic English made her work a vital contribution to our understanding of post-war Iraq — and won her a large following.

Baghdad Burning is a quotidian chronicle of Riverbend's life with her family between April 2003 and September of 2004. She describes rolling blackouts, intermittent water access, daily explosions, gas shortages and travel restrictions. She also expresses a strong stance against the interim government, the Bush administration, and Islamic fundamentalists like Al Sadr and his followers. Her book "offers quick takes on events as they occur, from a perspective too often overlooked, ignored or suppressed" (Publishers Weekly).

"Riverbend is bright and opinionated, true, but like all voices of dissent worth remembering, she provides an urgent reminder that, whichever governments we struggle under, we are all the same." — Booklist

"Feisty and learned: first-rate reading for any American who suspects that Fox News may not be telling the whole story." — Kirkus