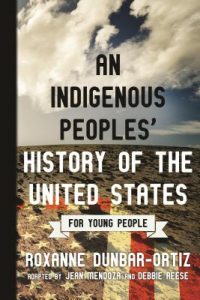 An Indigenous Peoples’ History of the United States for Young People spans centuries of resistance by the more than 500 federally recognized nations in the U.S. Even though the authors cover vast numbers of people and a long period of time, this account of the country’s evolution remains gripping, tightly written and packed with facts traditional textbooks and historical accounts neglect to cover.

In place of the standard “hero tales” of explorers, soldiers, politicians and others is a well-researched, frank, often heartbreaking narrative of industrious, developed civilizations decimated by greed and ambition, justified by so-called “divine decree.” Dunbar-Ortiz explains that contrary to popular belief, the Native people of the continent lived in communities, built roads, developed systems of government and benefited from complex interrelationships. But, she also says, “from the first moment Europeans stepped onto what came to be known as North America, they left bloody footprints wherever they went seeking land and resources. They found, however, that Indigenous people were not easily scared off or conquered.” Dunbar-Ortiz’s account illustrates Europeans’ attempts at deception, displacement, genocide and other atrocities, as well as the Indigenous people’s efforts to withstand them and preserve their ways of life. Continue reading.

Going beyond the story of America as a country "discovered" by a few brave men in the "New World," Indigenous human rights advocate Roxanne Dunbar-Ortiz reveals the roles that settler colonialism and policies of American Indian genocide played in forming our national identity.

The original academic text is fully adapted by renowned curriculum experts Debbie Reese and Jean Mendoza, for middle-grade and young adult readers to include discussion topics, archival images, original maps, recommendations for further reading, and other materials to encourage students, teachers, and general readers to think critically about their own place in history.