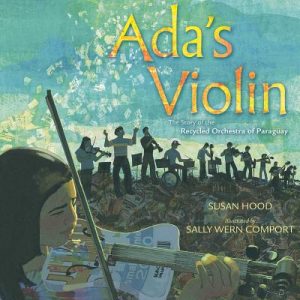 The story of Ada’s Violin begins in the town of Cateura, Paraguay, home to Asunción’s largest garbage dump and a girl with an early interest in music. Almost everyone Ada knows works as a ganchero, sifting through the piles of trash for recyclable goods. Just as Ada is beginning to realize how limited her options are in Cateura, her grandmother signs her up for music lessons. It quickly becomes clear that there will not be enough instruments in Sr. Chavez’s class for all of the interested students to learn to play, and Ada’s teacher is forced to get creative by making instruments out of the one resource Cateura has in abundance–trash! With her violin made of recycled materials, Ada’s interest becomes a passion and alongside her friends and neighbors she masters her instrument and begins to receive national and international recognition.

The story is nicely told, with beautiful illustrations, and Hood does a good job of showing how Ada’s music lessons also teach her valuable lessons in resourcefulness, self-confidence, and collaboration. Originally, music allows Ada a metaphorical escape from her life among the trash heaps of Cateura, but in time it also becomes a means for her to actually travel and see places and things she never would have imagined. Ada and the other members of the Recycled Orchestra of Paraguay gain a new understanding of the value of themselves, their community and what they previously perceived as the trash that fills it. An author’s note explains how the Recycled Orchestra has used its platform to re-invest in the community of Cateura, and to direct attention and resources towards other communities like it.

Publisher's Synopsis: From award-winning author Susan Hood and illustrator Sally Wern Comport comes the extraordinary true tale of the Recycled Orchestra of Paraguay, an orchestra made up of children playing instruments built from recycled trash.
Ada Ríos grew up in Cateura, a small town in Paraguay built on a landfill. She dreamed of playing the violin, but with little money for anything but the bare essentials, it was never an option...until a music teacher named Favio Chávez arrived. He wanted to give the children of Cateura something special, so he made them instruments out of materials found in the trash. It was a crazy idea, but one that would leave Ada—and her town—forever changed. Now, the Recycled Orchestra plays venues around the world, spreading their message of hope and innovation.