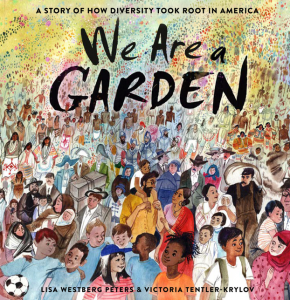 To understand this critique of We Are A Garden: A Story of How Diversity Took Root in America you must begin with, and hold fast to, the fact that Native peoples were nations of peoples before the U.S. was a nation. Our status as nations is why Europeans and (later) leaders of the U.S. made treaties with leaders of Native Nations. If Native Nations were not seen as nations with leaders who could enter into diplomatic negotiations, treaties with us would not exist. But they do exist and they do matter, today.  We are sovereign nations. None of that is in We Are A Garden.

Published in 2021 by Schwartz & Wade Books — an imprint of Random House — the cover of We Are A Garden shows a diverse group of people. In the foreground, you can see them clearly. As your eyes move to the background, they become specks that I take to be seeds for this “garden” being depicted by the author, Lisa Westberg Peters and illustrator, Victoria Tentler-Krylov.

Generally speaking, most people view a garden as a good thing. I do.

The back cover says:

The wind blows in newcomers from all directions. “They” become “we,” and we become a garden.