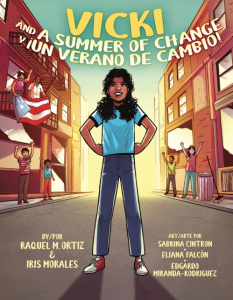 Vicki and a Summer of Change! ¡Vicki y un verano de cambio! is a bilingual picture book that teaches children a history often unacknowledged. While the 1960s in America marked a time of social movements around civil rights, the efforts and strides achieved by the Young Lords Party (YLP) are less known. In the spirit of providing a counternarrative, this book centers not only the activism of the Young Lords during the New York City chapter’s inception, but also highlights women members of the YLP. Based on true events known as the “garbage offensive” during the summer of 1969 in East Harlem, the fictional Alegría-Rodriguez sisters participate in the activist effort to clean the streets. Vicki, who is usually excluded from community meetings and events, is finally invited by her older sister, Val, to sweep, fill garbage bags, and pile them high in a barricade to get sanitation trucks to notice them and to gain national recognition on the injustice the community faces.

Vicki looks to her older sister, Val, as a role model. She admires Val’s pride in her Afro-Boricua identity, her outspokenness at community meetings, and her attendance at Nuyorican poet recitations. Although Val tries to protect Vicki from hearing the injustices their community faces such as hunger and sickness in El Barrio, Vicki still listens in the shadows at every event her sister attends, wishing that she could be a part of it.

On a humid summer day in 1969 in East Harlem, it becomes apparent that the injustices against the community are extreme violations of human rights, one of those being the right to clean air and streets. With garbage piled on the streets and the refusal of sanitation trucks to regularly pick it up, an odor fills the air. Desperately in search of a solution, two local activists take a trip to Chicago after discovering a group of Puerto Ricans called the Young Lords who have been fighting for positive change in their community. Inspired by the work of the Young Lords Organization (YLO), the activists form a local New York chapter and the first issue they tackle is the mounting garbage. Community members come together to sweep the streets and fill garbage bags to make pick up easier. As all the neighbors, young and old, participate, Val invites Vicki to come along and tells her, “You’re never too young to make a difference!” (15).

While a number of reasons are implied for Val’s change of heart to allow Vicki to participate, such as the garbage issue growing so large that it affects everyone and the clean up becoming a collective and active goal for all community members, Val’s sudden change could be more clear. It’s important for children to understand the shift from Vicki initially being withheld from participating in community actions for change to her becoming an active agent of social change alongside the adults and other children.

Illustrations of community members and some of the first female Young Lords, such as Sonia Ivany and Olguie Robles, show the collectivity of this event that came to be known as the “garbage offensive”. In all of the illustrations of Young Lords, there are just as many women members featured as men. This is important because it shows that women were a part of the grassroots of the Young Lords chapter in East Harlem, a fact often erased in the history of the organization. In this narrative that centers the activism of women, it serves largely as an act of correction. 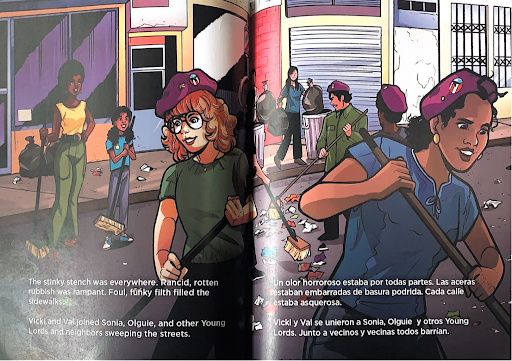 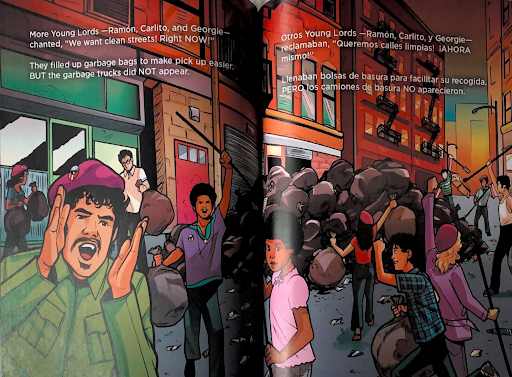 Despite weeks of cleaning, sanitation trucks still didn’t arrive. As a result, everyone pushes the garbage to the middle of the street, constructing a barricade of trash that blocks traffic. Only then did the community get national recognition on television and city officials sent sanitation trucks to pick up the garbage. While the community celebrated this win, much remained to be done and the Alegría-Rodriguez sisters would continue to participate in activist events together.

I recommend this book as it brings recognition to this important struggle and is written and illustrated by Puerto Ricans about Puerto Ricans.  Although this is a fictional account of a true event, there is neither an ending note that goes further into the history of the garbage offensive at the end of the book, nor a recommended resources page. Therefore, I suggest reading Through the Eyes of Rebel Women: The Young Lords 1969-1976 by Iris Morales for more context to provide children.

Palante, Siempre Palante! The Young Lords (Film 1996) by Iris Morales. Recommended viewing on the history of the Young Lords and the New York City chapter of the organization.

Publisher's Synopsis: Inspired by actual events in 1969, this beautifully illustrated book tells the story of how people in East Harlem, New York united with the Young Lords Organization to spark positive neighborhood changes. Vicki and A Summer of Change! ¡Vicki y un verano de cambio! follows Vicki and Valentina, her older sister, who live in East Harlem/El Barrio. The streets are overrun with rotting garbage because sanitation trucks rarely pick up trash in the neighborhood. Children and adults are getting sick. Members of the Young Lords Organization, Puerto Ricans, Latinx, and African Americans, start sweeping the streets. Valentina encourages Vicki to take part saying, "You're never too young to make a difference!" The sisters eagerly join their neighbors and discover that they can help change the world.