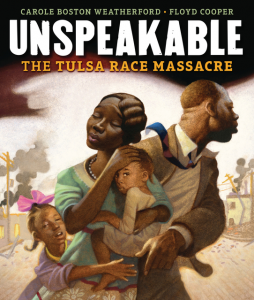 Written as a “Once upon a time . . .” story in a picture book format about the thriving Black community of Greenwood, Unspeakable centers on the history before the 1921 massacre. Children learn about the Black businesses, libraries, schools (“where some say Black children got a better education than whites”), bus system, auto shop, hospital, newspapers, movie theaters, hotel, and post office. Floyd Cooper’s stunning illustrations bring Black Wall Street to life. Then comes the white terrorists — “unchecked, in some cases deputized, by the police.” Sensitive to young readers without hiding the truth, author Carole Boston Weatherford continues the use of “Once upon a time . . .” to explain the tragedy that was designed by police and city officials “to destroy the nation’s wealthiest Black community.” The book closes with images of Tulsa’s Reconciliation Park. Recommended for grades 3+.

Celebrated author Carole Boston Weatherford and illustrator Floyd Cooper provide a powerful look at the Tulsa Race Massacre, one of the worst incidents of racial violence in our nation's history. The book traces the history of African Americans in Tulsa's Greenwood district and chronicles the devastation that occurred in 1921 when a white mob attacked the Black community.

News of what happened was largely suppressed, and no official investigation occurred for seventy-five years. This picture book sensitively introduces young readers to this tragedy and concludes with a call for a better future.