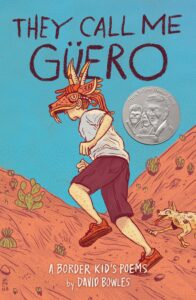 Memories from the author’s own childhood experiences—as well as those of his son, his friends, and the young men he worked with as a middle-school teacher—inform this too-slim book of poetry from the perspective of a 12-year-old Chicano border kid entering the seventh grade. Here, our super-smart protagonist and poet clearly knows who he is and what he comes from. And he’s learning what he’s been given to do.

Like his idol, the great Mexican boxer, Saul “Canelo” Álvarez, the boy whom everyone calls “Güero” is cinnamon-toned, too. Observant readers looking back to Zeke Peña’s digitally rendered cover art will notice that, as Güero and his dog run through the chaparral, the boy’s freckles and hair—along with the Huehuehcoyotl (“Feathered Coyote”) Nahual mask he wears—perfectly match the cinnamon-colored sand. The boy belongs to the land. He is “puro mexicano.”

As a child of dual cultures who has learned to float between different groups, Güero uses variations of language to express himself. He communicates in Spanish and English with his elder relatives (especially with his bisabuela, who enjoys instructing him traditionally through dichos), mostly English with his teachers and friends (“los Bobbys”), Spanish first with new arrivals, and an effortless combination of English, Spanish, Espanglish and code-switching with everyone else, including family and readers. It’s especially refreshing that there is no italicization of anything: the languages and word-images blend with an authenticity rarely seen in middle-grade stories. And it’s appropriate that the glossary does not distinguish between language types, which readers will be able to infer from context.

In school, Güero’s woke English teacher, Mrs. Wong, keeps a long-eared white rabbit in her room and talks about the Moon Rabbit in Korea and Mexico, gifts her class Aztec and Mayan and Chinese and Korean legends, and plants seeds in the lives of her young charges. It is from her that Güero comes to know that “poetry is the clearest lens for viewing the world.”

Güero’s own poetic styles include free verse, and rhymed and unrhymed couplets, tercets, quatrains and quintets; as well as sonnets, haiku, senru, and rap. In authentic sneak-dissing (or “come-and-get-me”) rap, for instance, Güero stands his ground by lobbing taunts back at classroom bullies like Snake Barrero (who has just slammed him into a locker and called him “güero cacahuatero” and “gringo nerd”):

Yo, bullies: lero, lero
I’m the mero Güero
a real cacahuatero,
peanuts and chile
all up in this cuero,
this piel, this skin—
it’s white, that’s true
but I’m just as Mexican
as you and you and you.

If there’s anything that Güero can’t handle, he can rely on his new fregona girlfriend, Johanna, to jump in. She’s sort-of a cross between the beautiful, stereotype-busting Mexican movie queen, María Félix; and the strong, courageous Mexican artist, Frida Khalo. Among her other talents, she uses judo skills to throw down bullies, crawls under cars to change the oil, and easily swaps out blown tires. And she “knows the perfect chile for all snacks.”  Continue reading.

Publisher's Synopsis: Seventh-grader Güero starts writing poems, thanks to his teacher. A Mexican-American, he's at home in Spanish or English and on both sides of the river.

It 's fun to be a border kid, to wake up early Saturdays And cross the bridge to Mexico with my dad.

The town's like a mirror twin of our own, With Spanish spoken everywhere just the same But English mostly missing till it pops up Like grains of sugar on a spicy pepper.

We have breakfast in our favorite restorán Dad sips café de olla while I drink chocolate Then we walk down uneven sidewalks, chatting With strangers and friends in both languages.

Later we load our car with Mexican cokes and Joya, Avocados and cheese, tasty reminders of our roots.

Waiting in line at the bridge, though, my smile fades. The border fence stands tall and ugly, invading The carrizo at the river's edge. Dad sees me staring , Puts his hand on my shoulder. "Don' t worry, m' ijo:

"You're a border kid, a foot on either bank. Your ancestors crossed this river a thousand times. No wall, no matter how tall, can stop your heritage From flowing forever, like the Río Grande itself."

David Bowlesgrew up and still lives in the Rio Grande Valley of South Texas. A many- faceted writer, he's the author of Feathered Serpent, Dark Heart of Sky: Myths of Mexico. He's a professor at the University of Texas Rio Grande Valley.