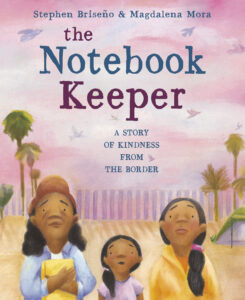 Our home is different. Not like it used to be.

When the protagonist, Noemí, and her mother are suddenly uprooted and forced to flee their homes in central Mexico, they seek refuge in the United States. At the border checkpoint, they meet Belinda, a fellow refugee and unofficial liaison between asylum seekers and government officials. She is a volunteer who keeps a notebook — a log of the names and home countries of displaced people. As Noemí and her mother wait to be called to meet with the authorities, Belinda’s friendship and kindness remain a consistent inspiration to the child in an environment where hope is fading. Noemí chooses to spread happiness herself, by helping travelers with their tents, beautifying the encampment, and sharing her beloved doll with a small girl. When Belinda’s number is called and she leaves the camp, she bestows the notebook upon Noemí, who has demonstrated her willingness to show compassion to others.

Stephen Briseño’s debut children’s book about an unfinished journey is based on real events and centers the experience of a Mexican child and mother. Briseño, a middle school teacher, was inspired to write this book after hearing the story of the “notebook keeper” of San Ysidro Border Crossing on a “This American Life” podcast.  Because the story is told from a child’s perspective, it makes the story of asylum seekers accessible to even the youngest readers. While it is a simplified tale, The Notebook Keeper makes a complex, politicized situation age-appropriate by including only sparse details and soft pastel illustrations. Young readers will enjoy the story of kindness and hope in the face of hardship, and older readers may be able to engage in discussion about the nuanced details and current events referenced in the book. The story ends with Noemí and her mother holding hands and waiting for entry to the United States. This realistic tale is made more poignant by their uncertain fate.

Magdalena Mora’s affectionate depiction of the people seeking asylum contradicts what we so frequently hear in the news and on social media. Mora’s “immigrant caravan” is made up of “Mamás. Papás. Abuelas and abuelos. Children like me,” as Noemí describes. 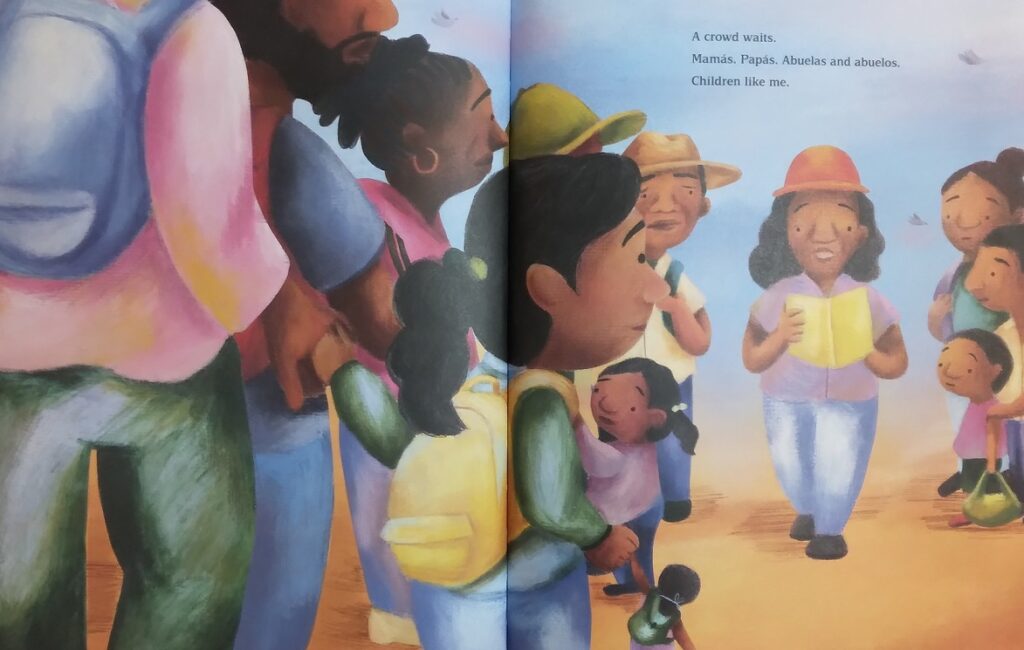 The girl’s hometown is not a squalid slum, but a neighborhood of colorful houses, well-kept gardens, and potted plants perched on windowsills. Similarly, the refugee encampment is not a dusty wasteland; members of the community have planted flowers and painted the steel fence, and a man operates a food truck. Refugees wear colorful clothing, headwear, hairstyles, and jewelry. Their skin is various shades of brown. These People of the Global Majority — from all over Mexico, Central, and South America — are lovingly depicted as a group of people seeking a better life. Both author and illustrator have crafted a work that includes and centers those who are often omitted from picture books: indigent families, single mothers, the houseless. To the border patrol agents, the refugees are just numbers. To the reader, they are human beings. The humanization of these characters makes this book an important, inclusive addition to any anti-bias classroom or homeschool.

Spanish vocabulary that appears in the book:

Publisher's Synopsis: Based on true events, this inspiring story follows a mama and her daughter who are denied entry at the U.S. border and must find the refugee in charge of “the notebook,” an unofficial ledger of those waiting to cross into the U.S.

Before, the sun drenched the yard. Our neighbor's laughter danced in the streets. Now, the streets are quiet. Papa is gone, and we are no longer safe here. We are leaving, too. In this moving and stunningly-illustrated picture book, Noemí and Mama flee their home in Mexico, and head for the US border. There, they look for "The Notebook Keeper" — the person in charge of a ledger for those waiting to cross, and they add their names to the book. As the days turn into weeks, and hope dwindles; the little girl looks for kindness around her — and inside herself. One day, when the Notebook Keeper's own name is called to cross, Noemí and her Mama are chosen — for the generosity in their hearts — to take her place.