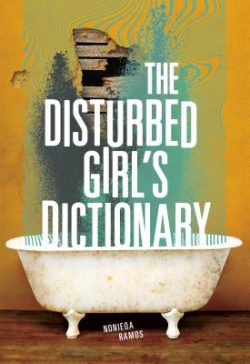 On many levels, The Disturbed Girl’s Dictionary is a brilliant book. It’s open and raw, exposing almost every level of damage inflicted upon the young teenage protagonist, Macy Cashmere. Themes of racism, misogyny, foster care, drug use, prostitution, and “mental illness” create a fast-paced and erratic read. Told in a series of vignettes in a dictionary format, Macy defines each word as she struggles to find the vocabulary to tell her story.

As Macy tries to keep track of her brother lost to foster care, a mother who’s bouncing from boyfriend to boyfriend, a father in prison, and a best friend struggling to raise her younger brothers and sisters, Macy’s world is in chaos. So she comes back to her dictionary, a diary where she shares the intimate details of her life and finds a safe refuge in her words.

Designated at school as “emotionally disturbed” with labels such as “ADHD” and “OCD,” Macy is keenly aware that her troubles are rooted in her circumstances, not a biological “mental illness.” She connects her “ADHD” with being hungry, she connects her “OCD” with being anxious about holding her world together, as plot lines involving racism and misogyny force her to confront her world with limited resources and very little guidance from elders. In this respect, the novel is much better than most when dealing with issues of so-called “mental illness” — it challenges the notion of biological “mental illness” by directly confronting the reader with the human struggles contained within these labels.

But once Macy commits a crime that lands her in the world of institutional psychiatry, the novel moves to a form of false narrative that’s pervasive in our society.

First, let’s address the problems inherent in depicting someone with psychiatric labels as being violent. While the context of Macy’s actions are clear as to the stressors that lead up to her violent act, the novel doesn’t bother to note that those with these labels are no more likely to be violent than the general public and are more often to be the victims of crimes. With the decades of stereotyping being lodged at those with psychiatric labels, it’s imperative that writers who are trying to be advocates of those with these labels — and I do believe this author truly is — be extremely clear about this fact.

These kinds of depictions have consequences. And over time, the portrayal of the “mentally ill” as being violent in movies, books, television, and even by psychiatry itself, has driven the rise in those being killed by the police. This is especially true for people of color. The constant depiction of the “mentally ill” as being violent in the media has also led to the rise in draconian legislation, such as the 21st Century Cures Act, as well as the call to bring back the asylums. It’s time for these types of depictions to stop, and when they are written about, it must be very clear that this is an exception to the rule. Otherwise, people subjected to these labels will continue to be harmed or even killed.

Another aspect of this novel that’s problematic is the fact that Macy simply walks away from the institution once she’s released. Since this novel does such a great job of presenting Macy’s world in a gritty, reality-based plot, this part of the novel reads more like magical thinking. Over a course of months, Macy is subjected to psychiatric drugs while in the Quiet Room (seclusion), but outside of this room, she secretly spits out the drugs. But this isn’t the reality that psychiatric survivors and current victims report regarding forced “treatment,” something listed as a form of physical torture by a Special Rapporteur to the United Nations.  Considering the drugs used by force are injections which last anywhere from two weeks to three months and come with a withdrawal syndrome that can be severe, omitting this aspect creates the illusion of psychiatry as some benign force designed for a temporary correction, not a chemical incarceration that lasts far beyond physical incarceration.

Macy is aware of the history of many of her oppressions — she can list the names of girls kidnapped in Nigeria and left out of most media due to their dark skin color and gender. She touches on the brutal history of the Taínos during colonization. She can name people of color killed by the police. But she can’t name anyone killed by psychiatry. This type of oppression, which has a long history of resistance, is not given the same level of scrutiny.

It’s clear this author is progressing toward a truthful account of psychiatry as social control and not a form of medicine, but she has a ways to go. This novel is both complicated and necessary, with characters that stay with you long after you put the novel down. For these reasons, the book comes recommended, but with caution.

Note to reader: Quotation marks are used in this review to reflect certain words that are metaphorical in nature, such as terms used in the novel to refer to psychiatric “disorders” that  don’t exist as biological illnesses. While the author doesn’t use quotation marks, this review is written within the culture of many psychiatric survivor writings.

Publisher's Synopsis: Macy's school officially classifies her as "disturbed," but Macy isn't interested in how others define her. She's got more pressing problems: her mom can't move off the couch, her dad's in prison, her brother's been kidnapped by Child Protective Services, and now her best friend isn't speaking to her. Writing in a dictionary format, Macy explains the world in her own terms—complete with gritty characters and outrageous endeavors. With an honesty that's both hilarious and fearsome, slowly Macy reveals why she acts out, why she can't tell her incarcerated father that her mom's cheating on him, and why her best friend needs protection . . . the kind of protection that involves Macy's machete.