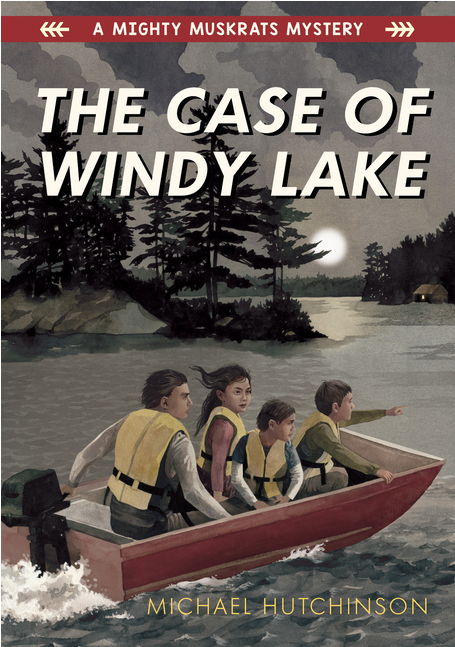 Hutchinson’s Mighty Muskrats are four cousins — Atim, Chickadee, Otter, and Sam — who live on the Windy Lake First Nation (pretty sure this is a fictional location) in what’s currently called Canada. These tweens are smart, curious, and resourceful. They operate out of an incapacitated school bus on the outskirts of their reservation community.

It’s tempting to do a chapter-by-chapter look at what makes this book so appealing — but with mysteries, that can mean spoilers. So I’ll just sum up.

The first case the Muskrats take on is the disappearance of an archaeologist who was working for a mining company in the area. There’s a subplot involving a beloved older cousin who actively opposes the mining company’s actions that she knows will endanger the community’s water supply. A lot of Indigenous communities have dealt with well-educated fools coming in to study them, and lots of Native kids have relatives who are involved in Indigenous environmental rights (and they may be activists themselves). The book’s main antagonist is a white mine manager; when he talks to the kids and their family members we see the same entitled hostility and disrespect Indigenous people encounter in real life today when they stand against exploitation and destruction of their resources. Continue reading.

Publisher's Synopsis: Sam, Otter, Atim, and Chickadee are four inseparable cousins growing up on the Windy Lake First Nation. Nicknamed the Mighty Muskrats for their habit of laughing, fighting, and exploring together, the cousins find that each new adventure adds to their reputation. When a visiting archeologist goes missing, the cousins decide to solve the mystery of his disappearance. In the midst of community conflict, family concerns, and environmental protests, the four get busy following every lead. From their base of operations in a fort made out of an old school bus, the Mighty Muskrats won’t let anything stop them from solving their case!