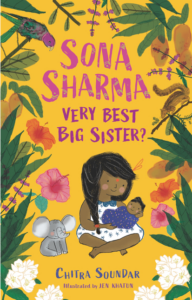 Note: While I recommend this book for early readers because it offers an authentic representation of the Hindu ceremony, namakarna, along with other Indian traditions and customs that accompany the birth of a new baby, it’s also worthwhile to note this naming ceremony is rooted in the gender binary.

Sona Sharma and her family are preparing for the birth of a new baby and as custom dictates, Sona’s amma must go to her mother’s house until the baby is born. Sona has never been away from her mother for so long and doesn’t want her to go. Sona also doesn’t like the tradition of passing down her baby clothes and toys to her new sibling. Paati explains that passing down family possessions brings good luck and blessings and new clothes would irritate the baby’s skin. Sona doesn’t like the thought of her favorite dress that she wore for her own namakarna and her favorite green cowrie shell rattle being given to the baby. Even though Sona initially resents these new changes, she’s determined to prove that she’ll be the best big sister.

As the namakarna draws near, Sona’s family explains to her the importance of the event. The naming ceremony takes place at an auspicious time, ten to twelve days after the baby is born. In the ceremony, the family spreads rice kernels on the floor and then each elder spells out a name in the rice kernels and whispers it in the baby’s ear. Paati and Thatha, Sona’s paternal grandparents, are to pick one name, Sona’s maternal grandmother is to pick a second, while Sona and her parents are to pick a third that’ll be the baby’s official name. But on the day of the ceremony, the priest requests a fourth name for the baby, one that will be her household name, and Sona thinks of the perfect name for her baby sister.

While the namakarna is to celebrate the new addition and pray for the baby’s health, what precedes it is a fixation on gender. Similar to popular gender reveals in America, the namakarna is a ceremony dependent on the gender of the baby, but unlike gender reveals, it’s harder to do away with the namakarna because it’s a revered tradition that stretches back for centuries. This book is also set in South India, where society hasn’t progressed to a place where non-binarism has been embraced.

This book can serve as a conversation starter for children of all backgrounds where the terms tradition and progress are further explored and adults make room to brainstorm with children on ways to maintain both ideals inclusively.

Publisher's Synopsis: Can Sona be the best big sister ever when she’s not sure she even wants a baby sister or brother? Brimming with warmth and charm, this story set in India will resonate with new older siblings everywhere.

Sona Sharma's house is full of three generations of people who joke often and argue sometimes. Relatives come over unannounced, the phone rings frequently, and friends drop by all the time. Then one day Amma tells Sona that she is going to have a baby. Is that good? Sona isn’t so sure. She doesn’t want to share her room or her things with a new baby, not to mention the attention of Amma, Appa, Thatha, and Paatti. And despite Amma's assurance that the sky always has room for new stars, Sona doesn’t feel stretchy or bighearted like the sky. But when she learns there will be a baby-naming ceremony, she’s determined to find the best name for her new brother or sister — one as nice as her own, a Hindi word for “gold.” Perfectly pitched to young readers, this tale of warming up to change is followed by a glossary of words from India to explore in the story.