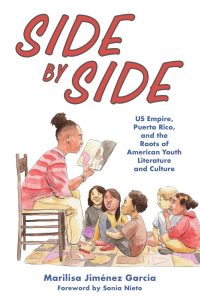 Side by Side: US Empire, Puerto Rico, and the Roots of American Youth Literature and Culture (University Press of Mississippi, 2021) by Marilisa Jiménez García is a timely monograph on the pervasiveness of U.S. coloniality in Puerto Rico and the Puerto Rican diaspora. Through a focus on youth literature and culture, Jiménez García critically centers Afro-Boricua pedagogy to trace the roots of what is presently understood as youth literature and culture in the United States and “speaks to a movement back to community-based education and public projects of critical literacy” (5). In the introduction, Jiménez García writes, “I use the phrase ‘side by side’ to refer to the dynamics of the U.S. and Puerto Rico colonial relationship as one that is functionally dysfunctional, inherently close, and awkwardly ambiguous” (3). Subsequently, the “side by side” dynamic is examined throughout the book with figures like Ángeles Pastor, Isabel Freire de Matos, Pura Belpré, Arturo Schomburg, Nicholasa Mohr, Sonia Manzano, Eric Velasquez, Lin-Manuel Miranda, and Edgardo Miranda-Rodriguez, to name a few.

[…] there has been a hesitancy to view the U.S. as an empire, preferring an immigrant paradigm in locating difference rather than a settler colonial model regarding past and present land acquisition, occupation, removal, and continuous displacement of Indigenous populations. Particularly in the case of Latinxs, the dominant discourse lingers on issues of immigration and the border rather than seeing the Latinx presence in the U.S. as a ‘harvest of empire’ (Gonzalez 2000). (14) Continue reading.

Side by Side by Marilisa Jiménez García
Published by University Press of Mississippi on 2021
Genres: Latinx
Pages: 260
Reading Level: Teachers and Parents
ISBN: 9781496832481
Review Source: The Latinx Project

Publisher's Synopsis: During the early colonial encounter, children's books were among the first kinds of literature produced by US writers introducing the new colony, its people, and the US's role as a twentieth-century colonial power to the public. Subsequently, youth literature and media were important tools of Puerto Rican cultural and educational elite institutions and Puerto Rican revolutionary thought as a means of negotiating US assimilation and upholding a strong Latin American, Caribbean national stance.

In Side by Side: US Empire, Puerto Rico, and the Roots of American Youth Literature and Culture, author Marilisa Jiménez García focuses on the contributions of the Puerto Rican community to American youth, approaching Latinx literature as a transnational space that provides a critical lens for examining the lingering consequences of US and Spanish colonialism for US communities of color. Through analysis of texts typically outside traditional Latinx or literary studies such as young adult literature, textbooks, television programming, comics, music, curriculum, and youth movements, Side by Side represents the only comprehensive study of the contributions of Puerto Ricans to American youth literature and culture, as well as the only comprehensive study into the role of youth literature and culture in Puerto Rican literature and thought.

Considering recent debates over diversity in children's and young adult literature and media and the strained relationship between Puerto Rico and the US, Jiménez García's timely work encourages us to question who constitutes the expert and to resist the homogenization of Latinxs, as well as other marginalized communities, that has led to the erasure of writers, scholars, and artists.