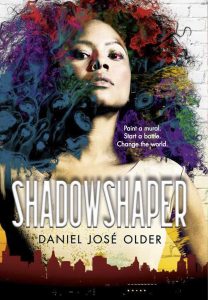 Last year I read Daniel Jose Older’s excellent essay in Buzzfeed Books. Titled “Diversity is Not Enough: Race, Power, Publishing,” it was shared widely in my social media networks. I started following him on Twitter, and learned that he had a young adult book in the works. By then I’d already read Salsa Nocturna and loved it. His is the kind of writing that stays in your head and heart.

I’ve now read his young adult novel, Shadowshaper, and am writing about it here. Older is not Native, and his book is not one that would be categorized as a book about Native peoples. There are, however, significant overlaps in Indigenous peoples. There are parallels in our histories and our current day politics. Continue reading.

Publishers Synopsis: COME TO THE CROSSROADS, TO THE CROSSROADS COME Sierra Santiago planned to have an easy summer of making art and hanging out with her friends. But then a corpse crashes the first party of the season. Her stroke-ridden grandfather starts apologizing over and over. And when the murals in her neighborhood begin to weep real tears... Well, something more sinister than the usual Brooklyn ruckus is going on. WHERE THE POWERS CONVERGE AND BECOME ONE With the help of a mysterious fellow artist named Robbie, Sierra discovers shadowshaping, a thrilling magic that infuses ancestral spirits into paintings, music, and stories. But someone is killing the shadowshapers one by one -- and the killer believes Sierra is hiding their greatest secret. Now she must unravel her family's past, take down the killer in the present, and save the future of shadowshaping for herself and generations to come. Full of a joyful, defiant spirit and writing as luscious as a Brooklyn summer night, Shadowshaper marks the YA debut of a brilliant new storyteller.
A Top Ten YALSA Best Fiction for Young Adults Selection A Top Ten ALA Quick Pick for Reluctant Young Adult Readers A Kirkus Prize Finalist A New York Times Notable Book An NPR Best Book of the Year A Publishers Weekly Best Book of the Year