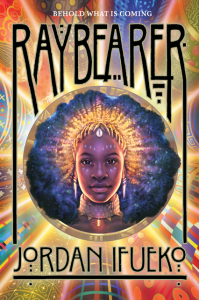 Jordan Ifueko’s Raybearer is both a fantasy and an epic novel. This is evident in its wide and diverse physical setting, Aritsar, presented as a continent and empire of different peoples and cultures; in its human characters who have magical powers and embark on dangerous and heroic missions, particularly the protagonist and narrator, Tarisai, whose actions and inactions will shape the future of the empire; and in its superhuman, otherworldly characters. However, the beauty of the novel lies in the fact that at the center of its plot is an action that can be carried out by an ordinary person with extraordinary determination. This action is finding one’s purpose, one’s “place in a grand story, a tale as old and pure as life, and stronger than any mortal’s wish” (205).

Tarisai must find hers, or she will remain trapped in the heinous wish of her mother, The Lady, to kill Dayo, the Crown Prince of Oluwan. Similarly, Olugbade Kunleo, King of Oluwan and Emperor of Aritsar will — all in the name of further uniting the twelve realms of Aritsar — succeed in his plan to destroy the cultural practices and products of the realms and foist values and manners considered to be representative of the empire on them. What is more, with the manipulation perpetrated centuries back by Enoba the Perfect, Aritsar’s first emperor, Songland will continue to pay the prize for peace by sacrificing hundreds of its children to the abiku spirits of the Underworld as contained in the Redemptor Treaty. This is notwithstanding the fact that Songland does not benefit from the economy of Aristar.  Having refused to be a part of the empire, it has a trade embargo placed on it, but has also been the only realm producing Redemptor children sacrificed to the Underworld.

In addition to power tussle, gender discrimination, oppression of common people, and other themes which the novel touches on, the revelation of this action as the ultimate thing Tarisai must do brings the relevance of the novel to human life and experience to the fore. What else could save us from being consumed by the sociopolitical crises that have long been threatening our human civilization if not the crucial need for everyone to find the purpose of their life? Continue reading.

The instant New York Times bestselling YA fantasy from incredible new talent Jordan Ifueko--perfect for fans of Tomi Adeyemi and Sabaa Tahir!
"Nothing like a boss @$$ fantasy with a gorgeous, dark brown girl at the center that highlights--in technicolor and glittering gold--the trifecta of our most basic of human desires: to belong, to be loved, and to walk a path of one's own choosing." -Nic Stone, #1 New York Times bestselling author of Dear Martin​

Nothing is more important than loyalty. But what if you've sworn to protect the one you were born to destroy?

Tarisai has always longed for the warmth of a family. She was raised in isolation by a mysterious, often absent mother known only as The Lady. The Lady sends her to the capital of the global empire of Aritsar to compete with other children to be chosen as one of the Crown Prince's Council of 11. If she's picked, she'll be joined with the other Council members through the Ray, a bond deeper than blood. That closeness is irresistible to Tarisai, who has always wanted to belong somewhere. But The Lady has other ideas, including a magical wish that Tarisai is compelled to obey: Kill the Crown Prince once she gains his trust. Tarisai won't stand by and become someone's pawn--but is she strong enough to choose a different path for herself? With extraordinary world-building and breathtaking prose, Raybearer is the story of loyalty, fate, and the lengths we're willing to go for the ones we love.