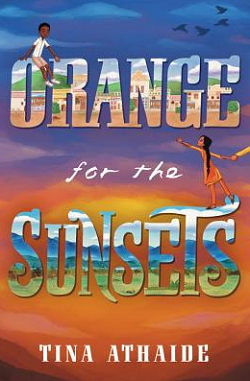 Set in 1972, Orange for the Sunsets is a welcome novel on the expulsion of Indians from Uganda under the regime of President Idi Amin, a topic that has been the subject of only one other adolescent novel about Africa in recent years (Shenaaz Nanji’s Child of Dandelions, 2008). The novel is based on the author’s memories of living in Entebbe until her family left for the United Kingdom, the first-hand experiences of friends and family, and extensive research.

The novel employs the alternating perspectives of two twelve-year-old best friends, Yesofu and Asha, both of whom were born in Entebbe but are exact opposites in other respects. Apart from the most obvious difference that one is an Indian girl and the other an African boy, there is a big divide in their lifestyles: one is rich, the other poor; one lives in a big house, the other is the son of the family’s housegirl, Fara, and lives in a small thatched house. The novel is organized into major sections such as 90 Days, 75 Days, 50 Days, 30 Days, and so on until only one day remains for Indians to leave Uganda; and each section is further divided into chapters. Each chapter is written in the third person, but it focalizes the voice of the character whose name serves as the title. The chapters advance the story by giving the reader a glance into the actions, experiences, thoughts, and feelings of the two friends and their separate worlds. The author further complicates the plot by introducing mirror characters in the two worlds—for instance, Asha’s classmates Neelu and Leela remind her that she is breaking the social norms of their community by mixing with her servant’s son; similarly, Salim and Akello taunt Yesofu for being a traitor to his community by having an Indian friend. Yesofu is influenced by his friends’ rhetoric and President Amin‘s promise of better jobs, educational opportunities, and infrastructure for Africans if Indians are kicked out.

The accounts of the two protagonists also juxtapose the differences in their level of maturity. The story begins at a crucial turning point in their relationship. Asha is an innocent, unaware, and self-absorbed girl who is wrapped up in her own world. In contrast, Yesofu is more mature; his moment of revelation comes when his mother warns him not to accept the invitation to Asha’s birthday party because of their intrinsic differences. Such mixed-race friendships are a common trope in colonial novels where the child of the colonizer is best friends with the child of the servant who works for them. At first both families accept the friendship, but when the children reach adolescence, the differences in their hierarchical society become important. As Orange for the Sunsets progresses, the character flaws of the two friends are revealed: they mean well, but their reasoning seems limited because they are not aware of all the facts and are not mature enough to think rationally of the consequences of their actions. Ultimately, both Yesofu and Asha learn the value of being frank and honest with each other and the wisdom of Fara’s words that “[s]ometimes . . . you have to let go of things precious to you”(152) because the situation demands it and not to do so would be unsafe. The fate of the friendship bracelet that Yesofu presents to Asha is symbolic of the ups and downs of their relationship, especially the orange bead that symbolizes not just sunset, but the end of an era, of their friendship, of Asha’s life in Uganda.   Continue reading.

Publisher's Synopsis: From debut author Tina Athaide comes a soaring tale of empathy, hope, and resilience, as two best friends living under Ugandan President Amin’s divisive rule must examine where—and who—they call home. Perfect for fans of Half from the East and Inside Out and Back Again.

Asha and her best friend, Yesofu, never cared about the differences between them: Indian. African. Girl. Boy. Short. Tall. But when Idi Amin announces that Indians have ninety days to leave the country, suddenly those differences are the only things that people in Entebbe can see—not the shared after-school samosas or Asha cheering for Yesofu at every cricket game.

Determined for her life to stay the same, Asha clings to her world tighter than ever before. But Yesofu is torn, pulled between his friends, his family, and a promise of a better future. Now as neighbors leave and soldiers line the streets, the two friends find that nothing seems sure—not even their friendship. Tensions between Indians and Africans intensify and the deadline to leave is fast approaching. Could the bravest thing of all be to let each other go?