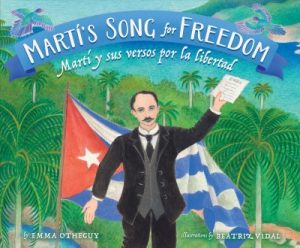 Every Cuban child knows the lyrics to the folk song, “Guantanamera,” the national song of Cuba. “Guantanamera” is an adaptation of several stanzas from José Martí’s Versos sencillos (Simple Verses), the last of his works to be published before his death in 1895; and since the American folk music revival in the 1960s, “Guantanamera” has been popular in the US as well.

A fierce yet gentle poet-revolutionary who fought against all forms of injustice, from slavery to colonialism, José Julián Martí Pérez is a national hero of the Cuban people. His many writings, along with thousands of images of him—in books, paintings, drawings, posters and on statues—can be found all over Cuba, and a gigantic marble memorial to him stands in Havana’s Plaza de la Revolución.

As a young man, Martí—affectionately called “Pepe”—found himself at the apex of what was to become a great struggle for the liberation of Latin America from Spain, and US intervention as well. He continues to be adored by the Cuban people and all who work for justice, and Marti’s Song for Freedom / Martí y sus versos por la libertad is the story of his early life, his first encounters with oppression, his organizing in Cuba and the US, and his joining the armed struggle for freedom.

In a series of paired stanzas, Otheguy and Domínguez each tell portions of Martí’s life and struggles in the style of Versos sencillos, his most famous work. Especially appealing are the placements of the English text and translation of a verso alongside the Spanish translation and one of Martí’s original versos, so that both hablantes and English-speakers can look from one to the other and examine them together. Continue reading about Marti’s Song for Freedom.

As a young boy, Jose Marti he traveled to the countryside of Cuba and fell in love with the natural beauty of the land. During this trip he also witnessed the cruelties of slavery on sugar plantations. From that moment, Marti began to fight for the abolishment of slavery and for Cuban independence from Spain through his writing. By age seventeen, he was declared an enemy of Spain and was forced to leave his beloved island. Marti traveled the world and eventually settled in New York City. But the longer he stayed away from his homeland, the sicker and weaker he became. On doctor's orders he traveled to the Catskill Mountains, where nature inspired him once again to fight for freedom. Here is a beautiful tribute to Jose Marti, written in verse with excerpts from his seminal work, Versos sencillos. He will always be remembered as a courageous fighter for freedom and peace among all men and women.