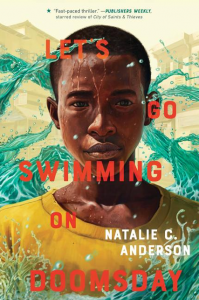 This action novel is a page-turner from beginning to end. The story is set in near-contemporary Mogadishu, Somalia, where the armed Islamist movement called Al-Shabaab conducts terrorist attacks on civilian targets, while African peacekeeping troops and U.S. anti-terrorism units try to contain and defeat it.  The novel toggles back and forth between several time periods. The back-and-forth is a bit artificial and confusing, but overall it works well and keeps readers at the edge of their seats.

In the beginning of the novel, Abdi, the teenage protagonist, is forced to stand by as his slightly older brother Dahir is abducted from their school by Al-Shabaab and disappears from the family’s life. Abdi himself is violently abducted by the head of a shady U.S. government operation, who, after having confined and savagely beaten Abdi for several days, forces him into going undercover with Al-Shabaab if he wants his family to survive and obtain resettlement abroad. Abdi finds that his brother has become a commander and committed convert to Al-Shabaab’s cause. Continuously pressured and threatened by the Americans, Abdi tries to gain the confidence of Al-Shabaab’s leadership. Sent on a “mission,” he finds himself forced to kill to protect his fellow recruits.  After escaping to Kenya’s Sangui City (a fictional mix of Nairobi and Mombasa, on the ocean), Abdi gradually builds relationships of trust with UN worker Sam and some of the young women of the shelter. The fastest-paced part of the narrative begins when they all find themselves trapped in an Al-Shabaab attack on the mall that is the site of their long-awaited group outing – reminiscent of the attack on Nairobi’s Westgate Shopping Mall of 21 September 2013.

Overall, this is an engaging, fast-paced, and quite violent narrative, in which abhorrence of extreme Islamist ideology and violence of any kind, as well as loyalty to family and friends, win the day.  There is perhaps more violence than what is, to the mind of this reviewer, necessary to the plot. Especially towards the end, the twists and turns of the plot are increasingly unlikely, although they allow for a welcome happy end. Except perhaps for Abdi, who nevertheless also killed people, there are very few positive Somali characters in the book. Most Somali characters are perpetrators or victims, with even Abdi’s mother and grandmother portrayed as feisty, somewhat pugnacious women. Continue reading.

Publisher's Synopsis: Forced to become a child soldier, a sixteen-year-old Somali refugee must confront his painful past in this haunting, thrilling tale of loss and redemption for fans of A Long Way Gone and What is the What.

When Abdi's family is kidnapped, he's forced to do the unthinkable: become a child soldier with the ruthless jihadi group Al Shabaab. In order to save the lives of those he loves, and earn their freedom, Abdi agrees to be embedded as a spy within the militia's ranks and to send dispatches on their plans to the Americans. The jihadists trust Abdi immediately because his older brother, Dahir, is already one of them, protégé to General Idris, aka the Butcher. If Abdi's duplicity is discovered, he will be killed.

For weeks, Abdi trains with them, witnessing atrocity after atrocity, becoming a monster himself, wondering if he's even pretending anymore. He only escapes after he is forced into a suicide bomber's vest, which still leaves him stumps where two of his fingers used to be and his brother near death. Eventually, he finds himself on the streets of Sangui City, Kenya, stealing what he can find to get by, sleeping nights in empty alleyways, wondering what's become of the family that was stolen from him. But everything changes when Abdi's picked up for a petty theft, which sets into motion a chain reaction that forces him to reckon with a past he's been trying to forget.

In this riveting, unflinching tale of sacrifice and hope, critically-acclaimed author Natalie C. Anderson delivers another tour-de-force that will leave readers at the edge of their seats.