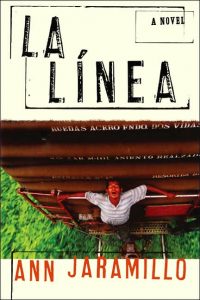 “It’s been six years, eleven months and twelve days since I left to go north across la línea. It’s time for you to come.” So reads the note that Miguel receives from his father on his fifteenth birthday. During the long separation (his mother has also emigrated), Miguel, his grandmother, and sister, Elena, 13, eke out a meager existence in drought-stricken San Jacinto, Mexico. Surely life holds more than this! In the note, Papá instructs Miguel to pay a visit to Don Clemente, the wealthy patrón of the area. Years back, Papá rescued Don Clemente from a house fire. Now the old man repays that debt by funding Miguel’s flight to El Norte.

The arduous journey across la línea involves several modes of travel: by bus, riding the roof of a freight train, and crossing the desert on foot. Miguel encounters a wide array of obstacles en route, including the unwelcome surprise that Elena is along for the journey, too. Despite a series of setbacks, the siblings and a helpful new acquaintance named Javier press on toward their dream. Continue reading.

Publisher's synopsis: Miguel has dreamed of joining his parents in California since the day they left him behind in Mexico six years, eleven months, and twelve days ago. On the morning of his fifteenth birthday, Miguel's wait is over. Or so he thinks. The trip north to the border—la línea—is fraught with dangers. Thieves. Border guards. And a grueling, two-day trek across the desert. It would be hard enough to survive alone. But it's almost impossible with his tagalong sister in tow. Their money gone and their hopes nearly dashed, Miguel and his sister have no choice but to hop the infamous mata gente as it races toward the border. As they cling to the roof of the speeding train, they hold onto each other, and to their dreams. But they quickly learn that you can't always count on dreams—even the ones that come true.
Latino Interest.