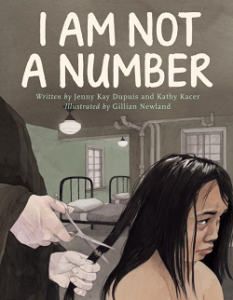 I recommend Jenny Kay Dupuis and Kathy Kacer’s I Am Not A Number, illustrated by Gillian Newland. Dupuis is a member of the Nipissing First Nation.

In 1928, Dupuis’s grandmother, Irene Couchie Dupuis, was taken to a residential school in Canada. “Residential” is the term used in Canada for the schools created by the Canadian government. They are similar to the government boarding schools in the U.S. These were schools designed to “christianize” and “civilize” Native children. Some of them were mission schools where efforts were made to convert the children to whatever denomination ran the school.

I Am Not A Number opens with a frightening moment. An Indian agent is at their door to take Irene and her brothers to residential school. When Irene’s mother tries to keep Irene, the agent says, “Give me all three or you’ll be fined or sent to jail.” Irene’s parents, like many Native parents, were coerced into giving up their children.

When Irene arrives at the school and tells the nun (it is a mission school run by the Catholic Church) her name, she’s told, “We don’t use names here. All students are known by numbers. You are 759.” Irene thinks to herself that she is not a number, hence, the title for the book.

Her hair, as the cover shows, was cut. That happened to children when they arrived at the schools. It was one in a long string of traumatic moments that Native children experienced at residential or boarding schools. Continue reading.

Publisher's Synopsis: When eight-year-old Irene is removed from her First Nations family to live in a residential school, she is confused, frightened, and terribly homesick. She tries to remember who she is and where she came from, despite the efforts of the nuns who are in charge at the school and who tell her that she is not to use her own name, but instead use the number they have assigned to her. When she goes home for summer holidays, Irene's parents decide never to send her and her brothers away again. But where will they hide? And what will happen when her parents disobey the law? Based on the life of co-author Jenny Kay Dupuis' grandmother, I Am Not a Number is a hugely necessary book that brings a terrible part of Canada's history to light in a way that children can learn from and relate to.