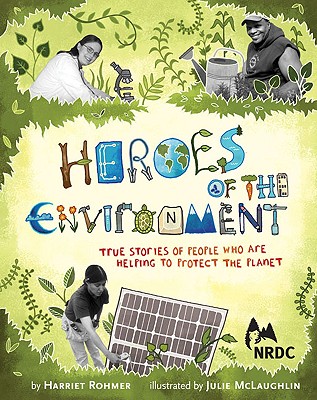 This nonfiction book for grades 4 and up celebrates the environmental triumphs achieved by a dozen unsung heroes of all ages located in various parts of the United States and Mexico. I’m giving it star billing because I feel it deserves wider attention. The environmental challenges the activists take on—from urban gardens to saving caribou—are as diverse as the heroes themselves. Of the twelve, three heroes are Latin@, two are Native American, two are African American, one is Asian American and the remaining four are white. Rohmer relates the story of each person’s activism in a short chapter illustrated with photos and art by Julie McLaughlin.

The determination, innovation and enterprising spirit shown by all twelve heroes is truly inspiring. Here is a brief recounting of one of their stories. Erica Fernandez is a young immigrant from Mexico who learns of plans by an Australian company to build a large processing station for liquefied natural gas near her new hometown in California. If the company’s plans go through, a large, potentially lethal gas line would run directly beneath her community. Using Spanish and broken English, Erica sets out to inform neighbors and elected officials about the grave risks. The outcry of the community eventually reaches the ears of the governor, who nixes plans for the gas line. Continue reading.

Publisher's synopsis: This inspiring book presents the true stories of 12 people from across North America who have done great things for the environment. Heroes include a teenage girl who figured out how to remove an industrial pollutant from the Ohio River, a Mexican superstar wrestler who works to protect turtles and whales, and a teenage boy from Rhode Island who helped his community and his state develop effective e-waste recycling programs. Plenty of photographs and illustrations bring each compelling story vividly to life.