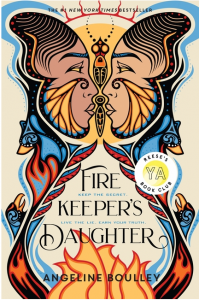 For months, now, people have been talking about Angeline Boulley’s debut, Firekeeper’s Daughter. When the cover art by Moses Lunham (Ojibway) was released, people talked about that. When Netflix announced it would be made into a film by the Obama’s production company, Higher Ground Productions, there was a growing chorus of voices. And then there was even more, when it appeared on the New York Times bestseller list!

It’s popularity is evident in the wait time at my local library. If I wanted to get an audio copy, I’d have one in 290 days; if I wanted the ebook I’d get it in 276 days. Of course, I had a personal e-copy, so won’t be adding my name to the request list at the library.

I was elated to see the review from Publishers Weekly. It used the words “tribally specific.” I think that is another “first” for Native writers. We’ve seen a few “firsts” recently. One is Carole Lindstrom and Michaela Goade’s We Are Water Protectors winning the Caldecott Medal, and another is seeing their book and a new one — I Sang You Down from the Stars by Tasha Spillett-Sumner, illustrated by Michaela Goade — on the best selling picture book list at the New York Times at the same time! Boulley’s book was over on the young adult list! Continue reading.

“One of this year's most buzzed about young adult novels.” — Good Morning America. A 2021 Kids' Indie Next List Selection. An Amazon Best Book of the Month for March Selection. An Entertainment Weekly Most Anticipated Books of 2021 Selection. A PopSugar Best March 2021 YA Book Selection.

With four starred reviews, Angeline Boulley's debut novel, Firekeeper's Daughter, is a groundbreaking YA thriller about a Native teen who must root out the corruption in her community, perfect for readers of Angie Thomas and Tommy Orange.

Eighteen-year-old Daunis Fontaine has never quite fit in, both in her hometown and on the nearby Ojibwe reservation. She dreams of a fresh start at college, but when family tragedy strikes, Daunis puts her future on hold to look after her fragile mother. The only bright spot is meeting Jamie, the charming new recruit on her brother Levi’s hockey team.

Yet even as Daunis falls for Jamie, she senses the dashing hockey star is hiding something. Everything comes to light when Daunis witnesses a shocking murder, thrusting her into an FBI investigation of a lethal new drug.

Reluctantly, Daunis agrees to go undercover, drawing on her knowledge of chemistry and Ojibwe traditional medicine to track down the source. But the search for truth is more complicated than Daunis imagined, exposing secrets and old scars. At the same time, she grows concerned with an investigation that seems more focused on punishing the offenders than protecting the victims.

Now, as the deceptions — and deaths — keep growing, Daunis must learn what it means to be a strong Anishinaabe kwe (Ojibwe woman) and how far she’ll go for her community, even if it tears apart the only world she’s ever known.