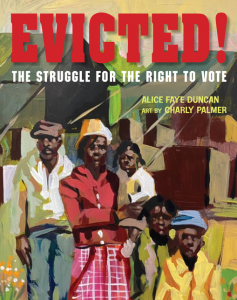 African American sharecroppers in Fayette County, Tennessee, tried to exercise their legal right to register to vote in the late 1950s. A key motivation was to break the practice of all-white juries which denied African Americans a fair trial.

The white backlash was brutal. Black people who attempted to register were “barred from buying groceries or gasoline and from receiving bank loans and medical services in the region.” They were evicted from their sharecropper shacks. Two of the few Black farmers who owned land provided space for the homeless sharecroppers to live in tents while they organized to defend their right to vote.

To prepare to tell this story, children’s book author Alice Faye Duncan conducted extensive interviews with people from that historic voting rights movement. The result is a well-researched people’s history picture book, written for upper elementary and also informative and engaging for adults. Duncan’s narrative and Charly Palmer’s illustrations describe the brave organizing by local people and the role of national media in soliciting vital support from around the country. Continue reading.

Publisher's Synopsis: Shortlist, Goddard Riverside/CBC Young People's Book Prize for Social Justice; This critical civil rights book for middle-graders examines the little-known Tennessee's Fayette County Tent City Movement in the late 1950s and reveals what is possible when people unite and fight for the right to vote. Powerfully conveyed through interconnected stories and told through the eyes of a child, this book combines poetry, prose, and stunning illustrations to shine light on this forgotten history.

The late 1950s was a turbulent time in Fayette County, Tennessee. Black and White children went to different schools. Jim Crow signs hung high. And while Black hands in Fayette were free to work in the nearby fields as sharecroppers, the same Black hands were barred from casting ballots in public elections. If they dared to vote, they faced threats of violence by the local Ku Klux Klan or White citizens. It wasn't until Black landowners organized registration drives to help Black citizens vote did change begin - but not without White farmers' attempts to prevent it. They violently evicted Black sharecroppers off their land, leaving families stranded and forced to live in tents. White shopkeepers blacklisted these families, refusing to sell them groceries, clothes, and other necessities. But the voiceless did finally speak, culminating in the Voting Rights Act of 1965, which legally ended voter discrimination.