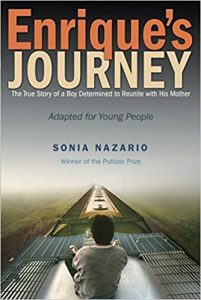 Original (adult) version also available – Enrique’s Journey: The Story of a Boy’s Dangerous Odyssey to Reunite with His Mother

The best creative non-fiction takes you straight down into the messy, contradictory, gut-wrenching heart of a subject, and awakens your appreciation for its complexity. By every measure, Enrique’s Journey is such a book. It’s the riveting epic of a Honduran teenager driven to escape intolerable conditions and fueled by the hope of crossing the border into the United States. The original version was published in 2007 as adult nonfiction. This edition, adapted for readers as young as the seventh grade, was released in 2013. It also updates the story. (Young-reader adaptations are a growing trend in nonfiction publishing.)

As Enrique launches his eighth attempt to reach the United States by means of train hopping, the risks are clearer than ever to him: death, dismemberment, robbery, extortion, and sexual victimization. But the way he sees it, staying in Honduras presents its own bleak and terrifying future. Gangs and violence are rampant, poverty is entrenched, and opportunities for work and self-betterment are virtually nonexistent. Worst of all, Enrique’s mother, Lourdes, has been absent from his life for an achingly long time. A single mother with no dependable means of support, she left for the United States when Enrique was five, entrusting her two children into the care of relatives. Enrique’s sister has weathered the eleven-year separation reasonably well, but it takes a heavy toll on the young boy. During his teen years in Honduras, he spirals down into serious drug use and antisocial behavior. As his life grows ever more troubled, Enrique imagines that reuniting with his mother will repair the hole in his heart. Continue reading.

Publisher's Synopsis: Adapted for young people, this edition of Enrique's Journey is written by Sonia Nazario and based on the adult book of the same name. It is the true story of Enrique, a teenager from Honduras, who sets out on a journey, braving hardship and peril, to find his mother, who had no choice but to leave him when he was a child and go to the United States in search of work. Enrique's story will bring to light the daily struggles of migrants, legal and otherwise, and the complicated choices they face simply trying to survive and provide for the basic needs of their families. The issues seamlessly interwoven into this gripping nonfiction work for young people are perfect for common core discussion. Includes an 8-page photo insert, as well as an epilogue that describes what has happened to Enrique and his family since the adult edition was published.

"A heartwrenching account. Provides a human face, both beautiful and scarred, for the undocumented. A must read."--Kirkus Reviews, Starred