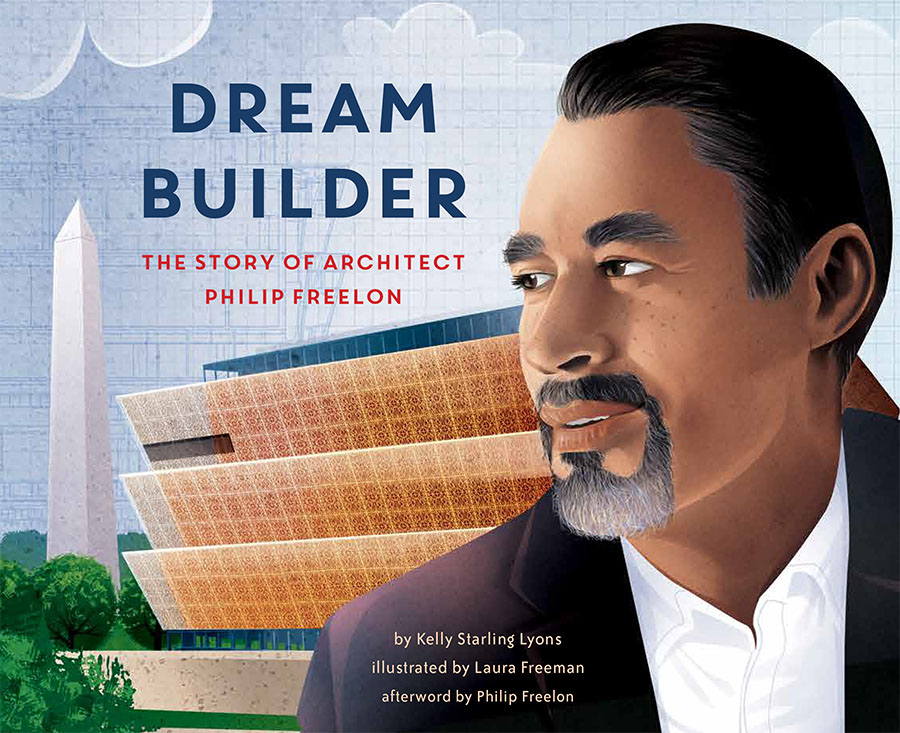 Dream Builder: The Story of Architect Philip Freelon tells of the celebrated architect’s path from his childhood in 1950’s Philadelphia to designing the National Museum of African American History and Culture (NMAAHC). Beginning with Freelon’s personal struggles with reading and strengths in math and visual arts, it then takes a wider look at his family of successful artists, teachers, and businessmen: Freelon’s role models and supporters. Zooming out even further, a theme of racial discrimination runs throughout, from tales of prejudice faced by Freelon’s father to lack of representation in his college architecture classes. Going from small to bigger to biggest, Dream Builder lays out a context in which Freelon seems destined to design the long-awaited museum.

Perhaps a bit long for an elementary read-aloud, Dream Builder pays off at the end of the book when all the puzzle pieces — the talent for architecture, the support of Freelon’s family, the dreams of his culture — come together. As one turns the page from a full-spread illustration of the museum’s gleaming copper exterior to the cool, dark Contemplative Court, one feels much the same sense of completion and reflection that the museum itself evokes. Of course, students won’t feel the magic unless they understand why the creation of the NMAAHC was so momentous, so the book will probably work better in upper elementary or even middle school grades, and with populations who have more background knowledge.

Besides social justice, there are many other angles for teachers to explore in Dream Builder, including dyslexia, learning differences, and STEAM. As an art teacher, I appreciate the detailed illustrations of a variety of specific media and techniques, such as gesture drawing, carving, and drafting. Dream Builder would certainly work well leading up to or following a field trip to the museum or even just to the National Mall to see the monuments. And though I wouldn’t necessarily read it aloud to an entire class, I would absolutely put it in the hands of any student interested in architecture or social justice.

Publisher's Synopsis: You've seen the building. Now meet the man whose life went into it.

Philip Freelon's grandfather was an acclaimed painter of the Harlem Renaissance. His father was a successful businessman who attended the 1963 March on Washington. When Phil decided to attend architecture school, he created his own focus on African American and Islamic designers. He later chose not to build casinos or prisons, instead concentrating on schools, libraries, and museums — buildings that connect people with heritage and fill hearts with joy.

And in 2009, Phil's team won a commission that let him use his personal history in service to the country's: the extraordinary Smithsonian National Museum of African American History and Culture.

Dream Builder: The Story of Architect Philip Freelon celebrates a contemporary black STEAM role model, a man whose quiet work enabled the creation of an iconic building reflecting America's past and future. With a stirring text by Kelly Starling Lyons, vibrant pictures by Laura Freeman, and an afterword from Philip Freelon himself, it is sure to inspire the next generation of dreamers and builders.