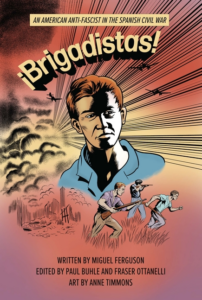 Sometime prior to my eighth birthday, my great-grandfather, the poet, writer, and anthologist William Stanley Braithwaite, bought me my first comic book. For reasons that I have long since forgotten, we walked to a pharmacy on the corner of Edgecombe Avenue and St. Nicholas Place in Harlem. While there, I was looking over the comic books and chose The Illustrated Story of the Coast Guard as the one that I wanted. My great-grandfather asked no questions and purchased it for me. I still have it somewhere in my house.

Thus began my love affair with comic books, an affair that lasted into my early teens, when it rather abruptly stopped. It no longer seemed “cool” to read and own comic books — and I had a range of them, from war comics to superheroes. Although I kept them stored in a box in my basement, any thought of them recessed to the edges of my memory. It was only years later that I rediscovered comic books — as well as, these days, graphic novels — as something that had a value exceeding mere entertainment for younger people. In Latin America, in particular, they became an important instrument for progressive and left-wing political education over the years. Increasingly, such comics have been reintroduced into the United States, too, though so much of the industry is dominated by the superhero genre. Continue reading on Monthly Review.

Publisher's Synopsis: A graphic history featuring the true story of three friends from Brooklyn who join in the global fight against fascism.

In this exhilarating graphic novel about the Spanish Civil War, three American friends set off from Brooklyn to join in the fight—determined to make Spain “the tomb of fascism” for the sake of us all. Together they defy the U.S. government and join the legendary Abraham Lincoln Brigade, throw themselves into battle, and conduct sabotage missions behind enemy lines. As Spain is shattered by the savagery of combat during the Spanish Civil War (1936-1939), readers see the darkening clouds of the World War to come.

Artist Anne Timmons has created a thrilling graphic novel in the spirit of the “war comic” genre that appeared after the attack on Pearl Harbor and the United States' entry into World War II. Drawing upon the real-life experiences of Lincoln Brigade veteran Abe Osheroff, writer Miguel Ferguson offers a lively, accessible resource based on actual events during the Great Depression and the Spanish Civil War. ¡Brigadistas! will stir the memories of older audiences who remember the Spanish Civil War as a time of unparalleled international solidarity and heartbreak, and it will expose young audiences to the passions, politics, and conflicts of a bygone era with striking contemporary relevance.