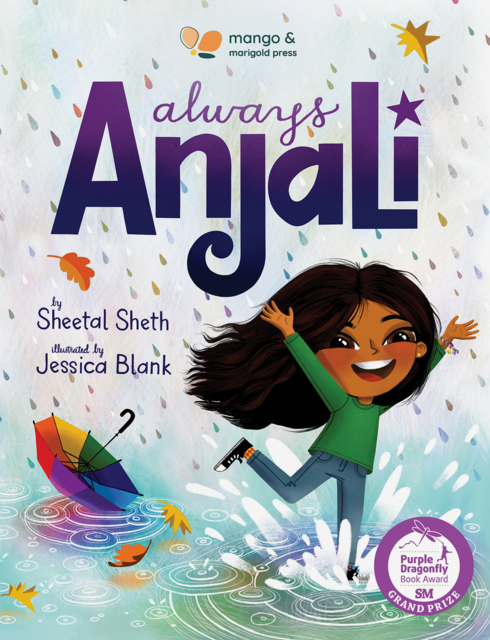 On the eve of Anjali’s seventh birthday, all she can think about is the new bike she asked her parents for. When she wakes up to the gift in her living room, she immediately wants to go riding with her friends, Mary and Courtney, to the school carnival. At the carnival, the three friends spot a booth with license plates and search for ones with their names to personalize each of their bikes.

Mary and Courtney quickly find theirs, but Anjali is disappointed when she can’t find one with her name. She asks the cashier for help and even spells out her name for him, but he just laughs at her and tosses her a plate that says “Angie.” Witnessing this exchange, one of Anjali’s classmates, Zachary, makes fun of her name by singing a peanut butter “an-jelly” sandwich song.

Anjali rides home with tears in her eyes and announces to her parents that she’s changing her name to Angie. Her mother explains to her that the name Anjali means “a divine gift” in Sanskrit, originating from their home country, India. Anjali’s mom reminds her, “To be different is to be marvelous.” (p. 21) Empowered by this, Anjali creates her own license plate and shows it to everyone in her class. Everyone is impressed by her plate and even Zachary’s taunts don’t succeed in getting Anjali down as she knew “there was greatness in not being one of the crowd and vowed to always be Anjali.” (p. 30)

This picture book is a mirror for children who don’t have Western European names, or who have names that aren’t common in their school, to be validated in some of the experiences they might face. Naturally, when there are customized items with names, many are left out. What exacerbates Anjali’s frustration in not finding a license plate with her name is the racially and culturally motivated bullying by Zachary, a visibly white character. Zachary sings, “Peanut butter an-jelly, can I get a peanut butter an-jelly with a dot on top?” (p. 13) drawing a ketchup bottle to his forehead.

Not only does Zachary mock Anjali about her name, but also about the tradition of South Asian women wearing red dot bindis. The red bindi in Hinduism is an honor for women, as it symbolizes marriage and is to be adorned with pride alongside sindoor on the hair parting. However, Anjali feels more embarrassment than pride as the subject of Zachary’s taunts and internalizes resentment for being culturally different. 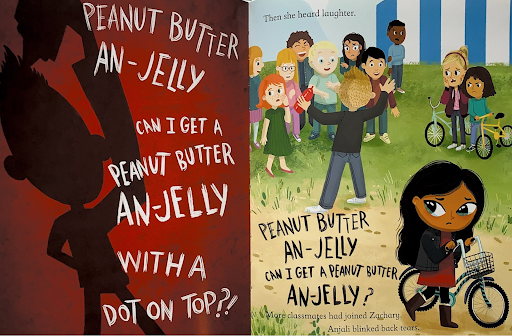 When Anjali becomes determined to change her name, her mother shares with her its meaning and origin from India, “an enchanting place, full of magic, and brilliance, and power” (p. 20) against a brightly illustrated bohemian style backdrop. India is traditionally and stereotypically described as a spellbinding land of wonder. While India is certainly a land of diversity and beauty, continuing to paint it as magical and enchanting may falsely align it with a mystical and ethereal illusion rather than an existing place in reality. 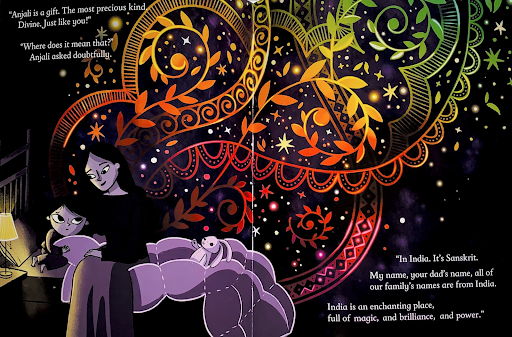 I also find it a bit questionable that Anjali’s mother is only prompted to tell her about the meaning of her name as a result of this negative encounter Anjali has, especially because oftentimes Indian names have deeply rooted meanings and Anjali’s mother makes it clear that all members of the family have names that originate from India.

However, the message received by Anjali from her mother is that she should be unashamed and proud of being different. With this knowledge, Anjali turns this experience into a means of empowerment and creates a unique, colorful license plate decorated with gem bindis, showing pride in both her name and culture. Her classmates are impressed by Anjali’s license plate and Zachary is left looking foolish when Anjali blows off his old taunts. 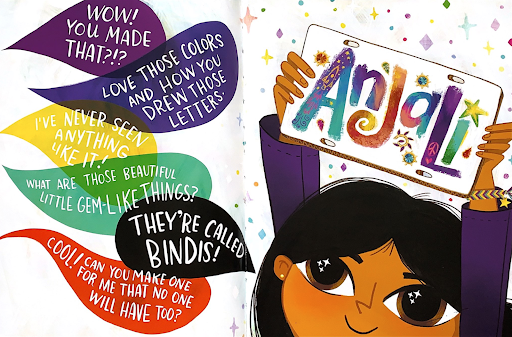 I recommend Always Anjali, as it fosters children’s positive self and social identities, encourages them to challenge adversity, and shows them that they can find solace in their family and pride in their heritage.

Publisher's Synopsis: Anjali and her friends are excited to get matching personalized license plates for their bikes. But Anjali can't find her name. To make matters worse, she gets bullied for her "different" name, and is so upset she demands to change it. When her parents refuse and she is forced to take matters into her own hands, she winds up learning to celebrate who she is and carry her name with pride and power. A timeless story about appreciating what makes us special and honoring our differences.