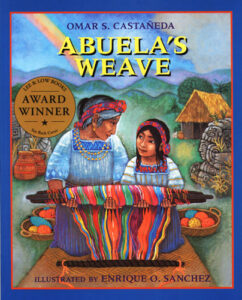 Abuela’s Weave tells the story of a girl (Esperanza) and her grandmother (Abuela), a tale of an older generation passing on a traditional artform — weaving — to a younger one. It begins in the rural Guatemalan compound where the two women live with their family. As Esperanza and her abuela weave huipiles (blouses), tablecloths, skirts, and a large hanging tapestry on their backstrap looms, the men and boys work in the fields, cultivating beans, corn, and coffee — a view of traditional, accepted gender roles. The women work to finish their handicrafts in time for the Fiesta de Pueblos, a celebration held in Guatemala City. Esperanza and her grandmother travel by foot and bus to reach the city, which is a stark contrast to her life in rural Guatemala. Esperanza bravely traverses the urban landscape and positions herself at the market in the central square. Will she be able to find a spot to sell? Will her handmade crafts compete with fancy machine-made goods? Despite a few setbacks, both local Guatemalans and tourists flock to her space and appreciate the beauty of her creations. The two return to their compound having sold everything they had made.

The magic of the story comes from the blend of Omar Castañeda’s rich descriptions of Guatemalan life and Enrique Sanchez’s soft depictions of the colors of the country. The illustrations include page borders depicting Guatemalan weaving patterns. Students and teachers may notice other intriguing details such as the shape and structure of traditional backstrap looms, materials used in the compound as compared to in the urban environment, traditional Mayan etchings on rocks and trees around the compound, and the quetzal* motif in both Esperanza’s huipil and in the corner of the tapestry she helped to create. They can also compare the hustle and bustle of a large Guatemalan city compared to the tranquil, open spaces of Esperanza’s home.

Part of the conflict of the story is that Abuela has a visible birthmark on her face, which both women worry will prevent sales. The author mentions that some villagers believed Abuela was a witch, which may suggest to readers that rural Guatemalans are simple, close-minded, unscientific, or overly superstitious. Rather than accompanying her granddaughter through a foreign environment, Abuela chooses to fully cover herself and travel incognito so as to not interfere with sales. Has the grandmother internalized this stigma? Only when she sees that Esperanza is able to successfully sell their wares does she uncover and reveal her birthmark. Perhaps the author added this detail to compel Esperanza to courageously sell her weavings by herself. Abuela’s shame in her appearance, however, may send an unintended problematic message to students with physical disabilities. The elder becomes dependent upon her granddaughter, a change which contradicts the roles they have already established. It is a questionable, and possibly unnecessary, subplot that should be considered and discussed with young children.

Castañeda and Sanchez bring to life the story of a young person who approached the unknown with confidence, overcame her fears and developed an understanding of the significance of one aspect of her culture. I recommend this book because it provides readers of all backgrounds a positive depiction of two protagonists who are both People of the Global Majority, and because it is an important addition to a sparse collection of picture books depicting Central American life.

* The quetzal is an important bird to Mayan and MesoAmerican cultures. It’s featured on the currency and the flag of Guatemala and is a symbol of freedom.

Huipiles – traditional embroidered blouses in El Salvador, Guatemala, Honduras, and Mexico.
Popol Vuh – the sacred book of the Maya, written in K’iche’ and recorded in the 16th century. It tells the creation myths of the Mayan people.

Publisher's Synopsis: A 1993 Parent's Choice Award honoree, this story about the importance of family pride and personal endurance introduces children to the culture of Guatemala through the eyes of little Esperanza, who works with her abuela--her grandmother--on weavings to sell at the public market. Full color throughout.