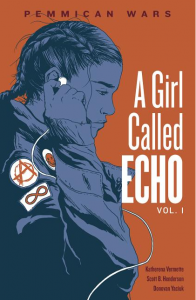 Apple, Echo, and the Importance of “More Than One Book”

Two Native high school girls, two unique stories about not fitting in, and about trying to make sense of Indigenous heritage/ancestry when something has disrupted their place in a Native community….

Most regular readers of this blog won’t need to be convinced that it takes more than one story about a group of people to adequately portray that group’s experience. Still, we know that in classrooms and in library collections across North America, the pickings are usually slim when it comes to books by and about Native people. So “the danger of a single story” Chimamanda Ngozi Adichie warns about is very real.

Katherena Vermette’s A Girl Called Echo: Pemmican Wars (2017) is a graphic novel. Echo, the main character, is 13 years old. She is Metis, as is Vermette. The story is set in Winnipeg, Manitoba.

Apple’s mother, who was Turtle Mountain Chippewa, died after giving birth to her. Apple grew up with her dad and stepmother (both white), in their upper middle class suburban world, where she feels like she never quite fits. She carries a sense of guilt for her mother’s death. She’s a bit prickly, and more than a bit socially awkward. Since an incident of open racism during grade school, she has tried to look as white as possible. Her father’s reluctance to tell her about her Native family hasn’t helped. As a narrator, Apple has a lot to say. She can be rude, impulsive, and loud, with a biting sense of humor, but she begins to dial it all down somewhat as she gets to know her Turtle Mountain relatives.

Of her sense of not fitting in, Apple says, “I call it the Ping-Pong effect because you’re the ball, and nobody ever wants you in their space. Have you ever felt like that? Never really belonging anywhere, but trying your darndest to run between two lives only to find you’re always stuck in the middle.”

Apple may feel that she’s constantly running, but Echo’s days in Pemmican Wars seem to involve just putting one foot in front of the other, with tremendous effort.

Unlike Apple, Echo is nearly silent. She’s emotionally isolated at school and in her foster placement, and moves as if something is draining all her energy. She spends most of her time with her earbuds in: Guns n Roses, Red Hot Chili Peppers. The only time we see anything like a smile on her face is when she finds some graphic novels about Metis history on a library shelf. She’s in a new school and knows nobody, though her history teacher seems to “see” her. When she falls asleep, she dreams herself into events from First Nations history, and it’s in those dreams that she seems to feel most alive—and where she has a friend. Continue reading.

For more reviews of books in the A Girl Called Echo series, see:

Publisher's Synopsis: Echo Desjardins, a 13-year-old Métis girl adjusting to a new home and school, is struggling with loneliness while separated from her mother. Then an ordinary day in Mr. Bee’s history class turns extraordinary, and Echo’s life will never be the same. During Mr. Bee’s lecture, Echo finds herself transported to another time and place—a bison hunt on the Saskatchewan prairie—and back again to the present. In the following weeks, Echo slips back and forth in time. She visits a Métis camp, travels the old fur-trade routes, and experiences the perilous and bygone era of the Pemmican Wars.