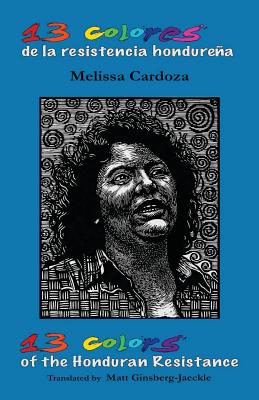 13 Colors of the Honduran Resistance tells the story of Honduran feminists fighting for their rights against an oppressive government. The book focuses on the aftermath of the 2009 coup against President Manuel Zelaya who was labeled a communist for actions such as defending peasants in their land struggles and doubling the minimum wage. The interim government that followed undid many of the progressive reforms put in place by Zelaya. The new government catered to corporate interests and granted the rights to build the Agua Zarca dam along the Gualcarque River, a source of spiritual significance and sustenance for the local community. In response, thousands of people flooded the streets in protest.

This powerful read weaves together the stories of 13 women who met in streets and bonded over their unwavering commitment to the revolution. A firsthand account of the Honduran Resistance and intersectional in approach, the stories include accounts from a lesbian reporter and an afro-indigenous woman in a place where the color of her skin could mean death. Cardoza givens an honest and detailed account of U.S. involvement in Honduran politics and is not afraid to criticize their actions. With a preface that discusses the interconnectedness of American and Honduran history and makes parallels to the struggles of African Americans,  13 Colors of the Honduran Resistance is a call to action.

The book is dedicated to assassinated indigenous leader Berta Caceres.

Publisher's synopsis: In 13 Colors of the Honduran Resistance, feminist author and activist Melissa Cardoza tells 13 stories about women from the Honduran resistance in the aftermath of the June 28th, 2009 coup against President Manuel Zelaya. On that day, led by a U.S.-trained General, the Honduran military barged in to the president's house and took him in his pajamas into a helicopter, flying him first to a U.S. base in Honduras and then on to Costa Rica. It was the first coup of the 21st century in Central America. The military and Honduran oligarchy quickly imposed an interim government, undid most of the progressive reforms underway, and passed hundreds of concessions to corporate interests. To the surprise of the coup''s backers, however, thousands of people around the country spontaneously came out into the streets. Their numbers and the depth of their vision and commitment kept growing during hundreds of days of consecutive protest, with fearless women at the forefront.
Melissa calls those the times "when protests were poetry in the streets." 13 Colors of the Honduran Resistance is her most intimate and impactful work to date. It is a book about the multiple and intersectional identities of those who found each other in the streets through the resistance. It is a book about what they share, not just with each other but with all people who struggle for a more just world. Melissa weaves the stories of 13 women together in a way that leaves readers unfamiliar with the events surrounding the coup and resistance in Honduras convinced of their fundamental importance to liberation struggles everywhere.
This bilingual edition is the product of collaboration with translator Matt Ginsberg-Jaeckle, who was introduced to the author by assassinated indigenous leader Berta Caceres, to whom this edition is dedicated.